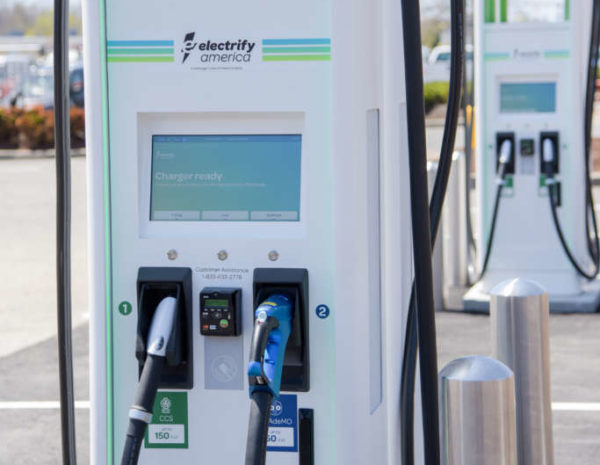 “Made in Reston” is a bi-weekly series that offers readers a glimpse of what is happening behind the closed doors of offices in the Reston area. As more office buildings scrape the skies, Reston Now chats with company officials at startups and up-and-coming businesses to capture the local business community scene.

A little over a year since it opened its first charging station, Electrify America is now on a mission to roll out the country’s fastest-growing network of zero-emission car chargers.

The Reston-based company hopes to fuel zero-emission vehicle adoption nationwide by deploying a network of highway chargers that are “convenient, ultra-fast and reliable,” per Company spokesman Mike Moran.

Part of the solution is to make charging for EV drivers as easy as possible, while also educating the general public about zero-emissions vehicles. Earlier this year, Electrify America launched a mobile app to allow EV drivers to “manage their entire charging experience on their mobile phone” — from finding a charger to tracking a charging session.

The company also plans to expand its partnership with Walmart by bringing dozens of charges in major urban areas at Walmart locations. So far, it has more than 120 charging stations at Walmart stores in 34 states. Other companies like EVgo and ChargePoint are also attempting to challenge Tesla’s hold over its fast-charger network, which has more than 11,200 superchargers around the world.

Electrify America executives are also exploring new partnerships with the EV charging company on roaming charging agreements with the company’s networks. Recently, the company announced it will work with Harley-Davidson to provide honors of a new all-electric motorcycle — the LiveWire — with complimentary charging over two years.

The push to grow its charger network and expand into motorcycles comes in the the wake of Volkswagen’s fuel emissions scandal, which led the automaker to pour $2 billion from its 2016 settlement into Electrify America.

Electrify America is a subsidiary of Volkswagen and first opened in an unassuming office complex on 2003 Edmund Halley Drive two years ago. As part of the Volkswagen settlement — which rocked the automaker industry and opened the door for other investigations into diesel emissions scandals — Electrify America now operates as an independent entity.

Moran says the company’s placement in the technology corridor of Reston now provides Electrify America with unique access to innovation partners in the state and across the country.

As more EV vehicles come online, company officials are confident that demand for EV vehicles will continue over the next five years, maintaining Electrify America’s relevance and the inspiration behind its name.

One way it’s hoping to stay relevant is by bringing EV vehicles mainstream through emojis.

The company submitted a formal proposal to the Unicode Consortium — the government body for emoji creation — to create the first-ever “EV with charger” emoji. Emojis, according to the company, should be “representative of today’s world” — whether it’s using the proposed emoji or the zero-emissions vehicle.