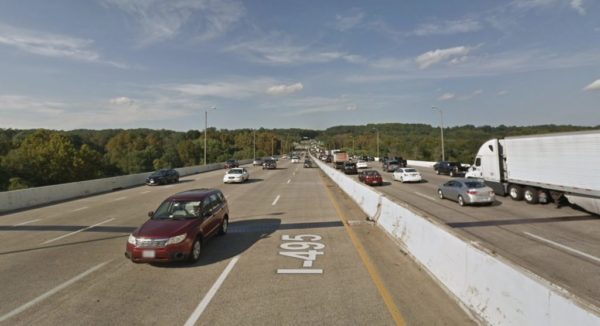 One of the region’s worst bottlenecks is expected to get some relief after state Gov. Ralph Northam announced a plan to expand the American Legion Bridge.

Virginia and Maryland, which will take the lead on the project, which Northam said was a “once-in-a-generation achievement for the capital region.” The interstate compact has been named the “Capital Beltway Accord”

Once completed, existing lanes in each direction across the Potomac River will be replaced and two new Express Lanes will be added in each direction for roughly three miles between George Washington Memorial Parkway in Virginia to River Road in Maryland. Trails on both sides of the Potomac River are planned to improve bicycle and pedestrian access.

Proud to stand with @GovLarryHogan to announce our new, historic Capital Beltway Accord. Finally, our two states have come together to rebuild the American Legion Bridge—a big win for Northern Virginia, the metro region, and our entire Commonwealth.https://t.co/lamx5p3zqr pic.twitter.com/av4wOhzYjI

“This is once-in-a-generation project that will improve accessibility throughout the region,” said Virginia Secretary of Transportation Shannon Valentine. “This is a milestone in regional cooperation. We in Virginia look forward to working hand-in-hand with Maryland to deliver this transformative transportation solution.”

While Maryland would rebuild the Legion Bridge, Virginia would pay nearly half of the cost.

No homes or businesses are expected to require relocation as a result of the project, according to a statement from the governor’s office.

Daily traffic on the American Legion Bridge has grown by 390 percent since the bridge opened in 1962.

The Northern Virginia Transportation Alliance, an industry-led group that advocates for transportation improvements, cheered today’s announcement, in a statement.

The Alliance applauds Governor Hogan and Governor Northam for working together to address one of the region’s worst bottlenecks.

This agreement exemplifies the importance of regional collaboration and public-private partnerships in solving our region’s transportation challenges.

Expanding the American Legion Bridge and the regional express lanes network have been long-standing priorities of the Northern Virginia Transportation Alliance. These improvements will:

It is the only bridge connecting Fairfax and Montgomery Counties – the two most populous jurisdictions in our region and home to nearly 40% of the region’s population and jobs.