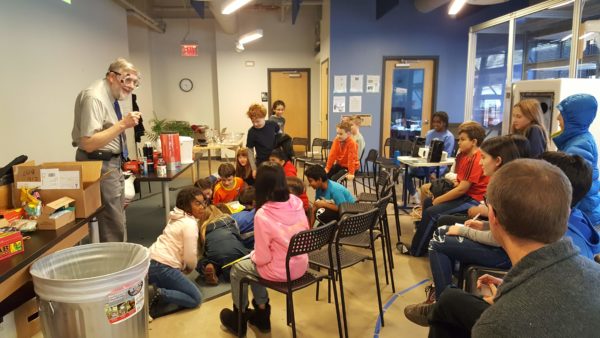 Bill Phillips, a physicist who shared the Nobel Prize in Physics in 1997, dove into physics and other topics with students at Ideaventions Academy for Mathematics and Science, an independent school for the gifted in Reston.

Phillips offered two presentations to students in 4th through 11th grade at the school. He discussed topics like atomic clocks, absolute zero and how physicists make atoms get cold. His presentation, which touched on topics like the National Institute of Standards and Technology and quantum principles, also included demonstrations with liquid nitrogen.

Phillips began his experiments with laser trapping and cooling shortly after he arrived in 1978 at the National Bureau of Standards (the agency that became NIST), with the intent of creating a more accurate atomic clock. Several of his innovations in the following years became landmarks in the field. These included a device using a laser along with a magnetic field to decelerate and cool an atomic beam (the “Zeeman slower”); demonstrating the first device that trapped electrically neutral atoms (a magnetic trap); and measuring a temperature far below that predicted by the accepted theory of laser cooling at the time (known as sub-Doppler cooling).

The academy’s assistant head of school and director of admissions, Juliana Heitz, said that students enjoyed the presentation.

“One of our 5th graders said that Dr. Phillips’ visit was one of his two favorite days in school ever,” Heitz told Reston Now.

Phillips, a NIST fellow, shared the Nobel Prize in Physics with Steven Chu of Stanford University and Claude Cohen-Tannoudji of the École Normale Supérieure in Paris, France. The team developed methods to cool and trap atoms with laser light.

END_OF_DOCUMENT_TOKEN_TO_BE_REPLACED

More Stories
Reston Eateries to Participate in Winter Restaurant WeekReston Now: Send Us Photos of the First Snow of 2020