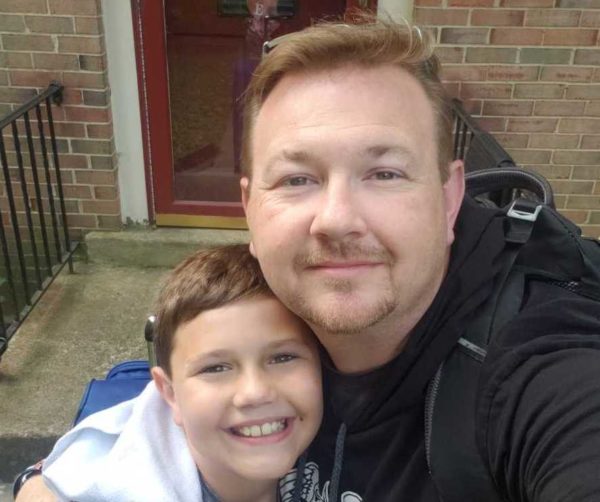 UPDATED at 2 p.m. — Tysons Reporter received new information from area hospitals about current needs and shortages. At this time, area hospitals are NOT in need of homemade medical masks, according to the spokesperson from Reston Hospital Center.

A Reston father and his two sons teamed up to make a group to help people who could be severely impacted by the COVID-19 outbreak.

After feeling bored in self-isolation, Colin, Hayden and their dad, Ray Whitney, researched how they could best assist their community and discovered a group called Caremongers out of Canada. After some guidance from its volunteers, the trio founded one of their own chapters for the Reston community.

Caremongers Reston VA is a group that writes letters and shares ideas with others on how to help and delivers groceries or medicine to people around the area who are elderly or immuno-compromised, according to Ray.

Ray said he founded the Facebook page for the group around March 18, and already, the group has helped roughly 40 people — and continues to grow its outreach efforts through a partnership with the United Christian Parish Reston, where the family attends services.

“Right now it’s really just me and my sons trying to push things through and get things set up,” Ray said.

The group said they were able to write a letter to a 100-year-old WWII veteran who celebrated his birthday on Sunday (March 22) without a group of friends due to health concerns.

“This is a unique opportunity for everybody to help,” according to Ray, who added that everyone is in a position to do something, even if it’s digitally reaching out to someone who might feel lonely in self-isolation or quarantine.

For people posting on social media, the group is using the hashtag #SpreadLoveNotCOVID19 to promote thoughtfulness during this time.

To protect themselves, the family is ensuring that they wear gloves during curbside deliveries, leaving the house only when they have to and making sure to practice social distancing — i.e. keeping 6 feet away from people — when they are out, Ray said.

Ray added that they are trying to be cautious but not fearful.

For kids, the Centers for Disease Control and Prevention warns that not every child will react the same way to stress from the pandemic and suggests that parents share facts with their kids and reassure them that they will be safe.

Colin is a 4th-grade student at Lake Anne Elementary and Ray said he is simply excited to be helping his community and that he seems to be handling everything okay. Hayden is currently a 9th-grade student at South Lakes High School.

“We are really proud of the fact he wants to step up and help people,” Ray said.