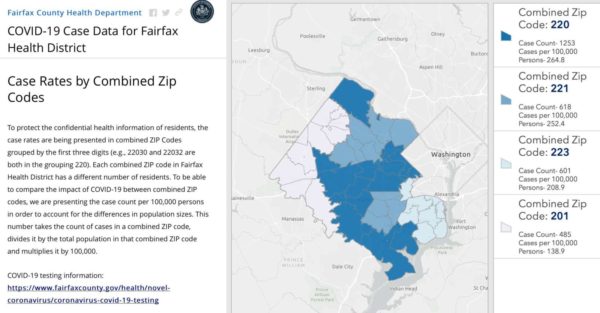 Over the weekend, Fairfax County unveiled a new COVID-19 dashboard, providing more insight into the geographic and racial data.

Fairfax County Health Director Gloria Addo-Ayensu cautioned that the data underestimate the outbreak and highlights areas where there may be disparities in the Fairfax Health District.

“Since many people with mild to moderate symptoms are not being diagnosed or tested, the data primarily represents people with more severe illness and should be interpreted with caution and not used to determine individual risk,” Addo-Ayensu said.

Rates in Northern Virginia are higher than elsewhere in the state. Although the Fairfax Health District has the most cases statewide, it does not have the highest prevalence of the disease when measured by cases per 100,000 residents.

Case rates are combined by grouping the first three digits of zip code. Reston and Herndon — which overlap over two zip code groups — have a case count of around 485. The county is presenting case counts per 100,000 residents in order to account for differences in population sizes across zip code groups.

The data are presented with several caveats. Onset dates could be inaccurate and tests may take several days to process.

As of today (Monday), Fairfax County has 3,002 cases and 100 deaths, according to the Virginia Department of Health. The cities of Fairfax and Falls Church both have just over two dozen cases and two deaths.

The Fairfax Health District, which includes the county and its towns and cities, continues to lead the state in the number of cases and deaths.

Of the 199 outbreaks in Virginia, 34 are in the Fairfax Health District with 31 at long term care facilities and one each at a healthcare setting, correctional facility and educational setting.