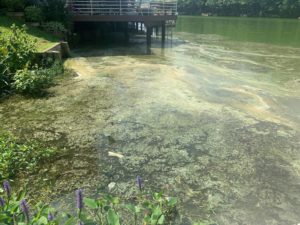 In mid-August, a major and possibly toxic algae bloom blanketed Lake Thoreau following Reston Association’s treatment of an invasive plant in the lake.

The treatment, which RA said was one of several factors that caused the bloom, was conducted much later into the season, making the bloom worse.

Following this issue and subsequent community meetings about lake management, RA CEO Hank Lynch wants to more than double its lake maintenance treatment budget for 2021 budget, which is currently under development. This year’s lake maintenance budget is $31,745, up from $17,103 in 2020’s. budget.

The association also plans to shift from treating the lake with contact herbicides to systemic herbicides earlier in the season to control the hydrilla plant.

“This solution will control the hydrilla before it gets to grow and become a problem in the lake,” according to meeting materials.

The systemic herbicide treatment is much more costly than previously used treatment but will produce more long-lasting results, Lynch said at a Board of Directors’ meeting last week.

RA also hopes to remove water lillies at Lake Newport every few years. Its consultant, Aquatic Environment Consultants, will “continue to monitor to determine the right timing of this treatment,” according to meeting materials.

The removal of primrose and alligator weed at Lake Thoreau on the shoreline and along the dams has also been identified as a pending project. The issue will be addressed based on growing conditions this summer.

The lake will also be stocked with 130 carp — which consume aquatics plants — to help manage the overgrowth of certain aquatic plants like hydrilla. The lake was last stocked in 2017 with 80 carp.