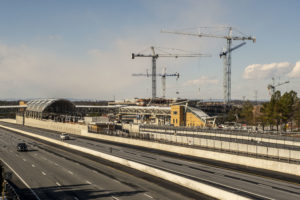 Volkswagen Group of America has signed a lease to become the anchor tenant of Boston Properties’ new 1.1 million square foot development in the next phase of Reston Town Center.

The new extension of RTC includes a two-tower office development called Reston Next, retail space, a hotel and residential buildings.

The subsidiary of Volkswagen AG, a major automobile manufacturer, retains its headquarters in Fairfax County as a result of the move. The company first selected the county for its North American headquarters in 2007.

“A company focused on the future of mobility needs a future-proof workspace to match those ambitions,” said Scott Keogh, President and CEO of Volkswagen Group of America. “This space is designed from the start to be efficient, collaborative and bring our team under one roof so we can keep and attract top talent.”

Victor Hoskins, president and CEO of the Fairfax County Economic Development Authority, lauded the news in a statement.

“This speaks volumes about our value as a headquarters location and the ability to find and keep high-caliber talent, and joins announcements by Microsoft, Google and Facebook as important indicators of the strength of this business community, especially in a difficult period economically,” Hoskins said.

Boston Properties executive Vice President  for the DC region Peter Johnston said his company is “thrilled” at the lease. So far, the next phase of RTC is 85 percent pre-leased, according to a quarterly earning calls.

“Companies looking to recruit and retain the best and brightest talent continue to be drawn to Reston and Reston Town Center as the ideal location to grow their organizations,” he said.

Once completed, the full extension of RTC — which will be built out in two phases — will add more than 4.4 million square feet of development to Reston Town Center, including six acres of public open space.