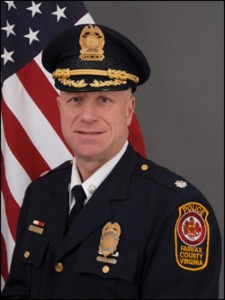 The FCPD says Roessler will retire after eight years as Fairfax County’s police chief effective February 2021 in order to transition the agency, which is the largest police department in Virginia, to a new generation of leadership.

“The FCPD is blessed with women and men, past and present, who understand their noble calling in life and are deidcated to serving and protecting others,” Roessler said. “…Our county leaders, community and its great police department are positioned to continue to serve as a model for the next generation of policing in America.”

Roessler’s tenure with the Fairfax County Police Department spans more than three decades. First hired as a police recruit in 1989, he rose to the position of deputy chief before serving as interim Chief of Police in early 2013 to replace then-Chief David Rohrer, who had been promoted to deputy county executive for public safety in October 2012.

After the Board of Supervisors established an independent Ad Hoc Police Practices Review Commission to examine the FCPD’s policies and relationship to the community it serves, Roessler oversaw the implementation of many of the commission’s recommendations, including the creation of a body-worn camera program, the establishment of a civilian review panel and independent police auditor, and modifications to the department’s use-of-force policy.

The FCPD also started a Chief’s Diversity Council and worked with county leaders and community advocates through the Fairfax County Communities of Trust Committee, which was formed in 2015 by then-Board of Supervisors Chairman Sharon Bulova and led by then-Fairfax County NAACP President Shirley Ginwright.

Fairfax County Board of Supervisors Chairman Jeff McKay thanked Roessler for “his years of service to Fairfax County and his dedication to protecting our county,” emphasizing Roessler’s efforts to work with the board to implement reforms “that have solidified the police department as a leader in transparency and community trust.”

“I know I join many in wishing the Chief continued good health and success in his next chapter,” McKay said. “I look forward to beginning the search for his successor and continuing to build on our successes in Fairfax County.”