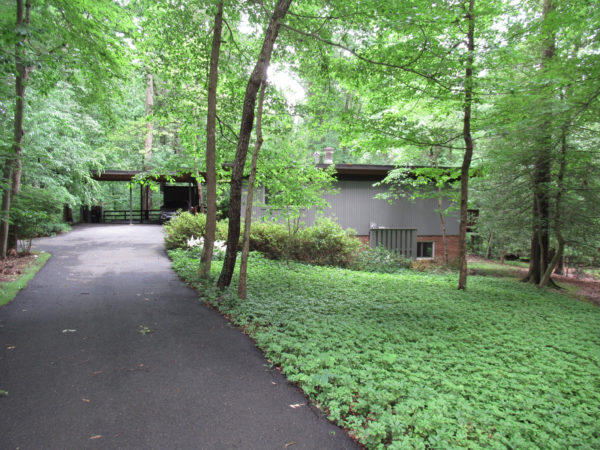 They include the Ring Road subdivision in North Reston, two area golf courses (Reston National and Hidden Creek), a number of 1960s-and-1970s-era housing clusters, and the Ken Bonner-designed residence on Stirrup Road.

The survey’s goal was to determine significant historic districts and buildings that were constructed during Reston’s prime development years – between 1961 and 1978. It was commissioned by the Virginia Department of Historic Resources and conducted by Mary Hanbury of Hanbury Preservation Consulting, a historic preservation consulting firm out of Raleigh, North Carolina.

The survey covered all of Reston, except for the land within Lake Anne Historic District. This district is already on the National Register of Historic Places.

In a community meeting held last night (Jan 5), Hanbury explained that the survey and field work reconnessicance first began in December 2019. It took the better part of a year to conduct. She reviewed eight potential historic districts and 51 individual properties in Reston.

The survey consisted of photos, locational mapping, creating or finding site plans, and a brief written history of the location.

From this, she determined that ten locations were “potentially eligible” for inclusion on the National Register of Historic Places.

“Potentially eligible” refers to the places that meet the requirements for eligibility for inclusion – meaning they are at least fifty years old (unless in exceptional circumstances), looks much like it did in the past, and has significant historical or architectural value.

However, it’s not up to Hanbury if it will be included on the National Register.

“I can not say that something is eligible for the National Register. That is something that the state department of historic resources also the national park service determines,” Hanbury explains. “But part of this as a professional is to say ‘this is something that I think is potentially eligible.’ Technically, I’m not in power to say that it is [eligible].”

The ten locations are:

The survey also namechecks several locations that could be eligible once they hit the fifty year benchmark. They include the Atrium condominiums on Roger Bacon Drive, Sheraton Reston Hotel, and the Fairway Cluster. They all will hit their fiftieth birthday over the next few years.

Additionally, there are few places that the study determined merited “further study” ( including Lake Anne Gulf gas station, Fairway Apartments, and Cameron Crescent Apartments) as well as those that are “likely not eligible” due to significant changes that rendered them too different from when they were initially constructed.

Hanbury cautions that the National Register has very particular rules and regulations and is only one measure of historic importance.

“It is one that is commonly used and a good frame of reference,” said Hanbury. “But they are places that aren’t eligible… that are important and can be locally designated.”

After the presentation, a few members of the community spoke mostly commenting on other historical locations in Reston.

One community member asked why a number of golf courses were included considering that, in his understanding, are “environmental deserts” and were mostly used by “super affluent, white people.”

This comment received several retorts, notably that the golf courses were used by Reston’s diverse population and that local wildlife thrived there.

“The reason the falcons over at Reston Town Center have a place to hunt and eat is because of the open fairways that the Reston golf courses offer them,” said a citizen.

The survey will be used to determine what properties have historical value and should be nominated for historical designation.

It could also inform any future changes to Reston’s comprehensive plan, noted Fairfax County Board Supervisor Walter Alcorn of the Hunter Mill District.

“The report includes recommendations for future documentation and preservation efforts,” wrote Blake McDonald of Virginia’s Department of Historic Resources in an email to Reston Now. “[The department] hopes that Fairfax County will pursue some of these recommendations and we look forward to partnering with them on those efforts.

The public can continue to comment on the survey through January 10.