The Fairfax County Health Department has completed sending out vaccine appointment invitations to 42,000 eligible residents who signed up on Jan. 18 and are now hopeful they’ll be able set up appointments at a faster clip.

“Now that we have got thru [Jan. 18 registrations], we anticipate that we will move more quickly through the other dates,” Tina Dale, a spokesperson for the Fairfax County Health Department, writes Reston Now. “In addition, we are working with more vaccination partners, so this, too, will assist us in moving through our registration list faster.”

If residents registered on Jan. 18 or before and have not received an invite, Dale says they should check their spam folder. If there’s no email with the subject line “Schedule Appointment,” residents should call the COVID-19 Vaccine hotline at 703-324-7404 and a call taker should be able to assist.

The county’s dashboard now says they are currently making appointments for those who registered on Jan. 19.

Six weeks ago, the county first allowed residents who qualified for Phase 1b to register for COVID-19 vaccine appointments. Phase 1b includes residents 65 years old and over and those 16 to 64 with underlying medical conditions. 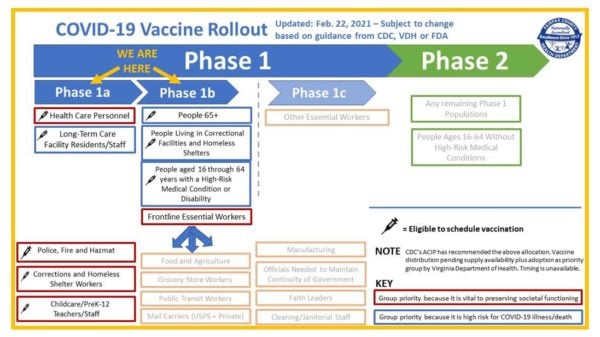 On that first day when vaccine appointments opened to those in Phase 1b, Jan. 18, more than 42,000 eligible signed up and registered – far exceeding another other day.

In fact, as the dashboard shows, the 42,000 registrations on Jan. 18 alone were approximately the same number of combined registrations over the next four days.

The county acknowledged that sending everyone an invitation to schedule a vaccine appointment who signed up on Jan. 18 would take “several weeks.”

Nearly 94,000 residents remain on the waitlist, which means they are awaiting an invitation to schedule an appointment.

The county says they don’t have an estimated timeline for when those remaining 94,000 people will be sent an invitation to sign up for a vaccine appointment or when the county will move to sign up those in Phase 1c for appointments.

However, the Virginia Department of Health expects the vaccine supply to increase over the next two months, says Dale, and the Commonwealth has said they expect to get through all of those who are eligible and want the vaccine in Phase 1b by mid to late April.

Overall, about 176,700 residents have been vaccinated in Fairfax County, which represents just over 15% of the total population in the county.

That’s comparable to Virginia and the country as a whole, which has vaccinated about 16% and 15% (respectively) of the population according to the Washington Post.

Additionally, on Friday, the county acknowledged that there issues with about 2,800 registrations “not being correctly captured in the system due to technical errors.”

Dale says that these registrations have been corrected and were a result of a combination of issues, including both “user error and system error.”

Since then, the county has added new features to the registration to reduce the possibility of user error, like providing two fields for email addresses and limiting the number of characters for phone number and zip code.

The county is also asking people to review the spelling of their names and email addresses as well as ensure their date of birth is accurate to make sure there are no errors.