(Update: 10:45 a.m.) Thanks to federal and state partnerships, some local retail locations of CVS, Walgreens, Safeway, and Harris Teeter are all offering no-cost vaccine appointments separate from the county.

But appointments remain extremely hard to come by even as the one-dose Johnson & Johnson begins to roll out. Demand far exceeds supply.

Virginia is currently in Phase 1b, meaning those 65 or over and those with 16 to 64 with underlying medical conditions are eligible to receive the vaccine.

The Virginia Health Department tells Reston Now that more than 80,000 doses are being given to retail pharmacies state-wide for distribution, an increase from last month.

The 69,000 J&J vaccine doses announced last week started coming in yesterday, VDH confirms, and clinics across the state are expecting to start using it today (March 5).

VDH also says that they’ve directed retail pharmacies to “prioritize” those 65 and over to “make significant progress in vaccinating that vulnerable population.” All of this provides hope that more vaccines and more appointments will soon become available for those that are eligible.

Currently, 41 CVS pharmacies are offering the vaccine in Virginia with appointments booked through their website. But that includes only one location in Fairfax County. The location is in Fairfax, but is listed with no exact address.

CVS spokesperson Amy Thibault tells Reston Now there are roughly 41,580 appointments per week available at the 41 locations statewide. Most of them are using the Moderna vaccine. Basic math says that’s about 1,000 appointments per store per week.

However, as of March 4, all appointments are booked at that one Fairfax location.

“In most (if not all) states, the number of individuals who are eligible to receive the vaccine under the state’s rules far outnumber the state’s available doses,” she says.

Currently, in Fairfax County, more than 100,000 people remain on the county’s waitlist. About 183,000 county residents have already been vaccinated.

Thibault confirmed that CVS is receiving a “one-time allocation” of 212,000 doses of the Johnson & Johnson vaccine this week which will be spread across their stores in 17 states. Scheduling for that began yesterday (March 4) on the CVS website and administrating begins today (March 5).

She says that CVS has the capacity to administer 20 to 25 million doses a month nationwide, assuming there’s an adequate supply of not only the vaccine but also supplies.

At the other retail pharmacies offering vaccines in Fairfax County, challenges are similar.

Safeway, and its parent company Albertsons, are also offering appointments to those 65 and over. According to their online scheduler, the one-dose Johnson & Johnson vaccine is also now being offered.

Locations in the county include one on Elden Street in Herndon, South Lakes Drive in Reston, Georgetown Pike in Great Falls, and West Ox Road in Fairfax.

So far, no appointments are currently available at least through March 13 at any locations.

“Store supply is based on allocations from state and local health departments. New appointments are added to the online scheduler as more vaccine become available,” writes Andrew Whelan, Albertsons spokesperson, to Reston Now. “Demand is high and appointments are often claimed very quickly. As dose allocations increase, so too will the opportunity to secure an appointment.”

Walgreens announced their participation in the federal partnership and started administering vaccines in Virginia. But, at least as of March 4, there are no appointments available within 25 miles of Reston, Fairfax, or Tysons. 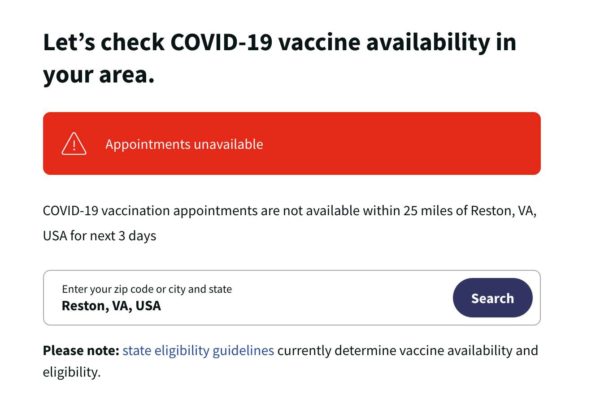 Harris Teeter’s website notes that they were to start distributing vaccines this week in Virginia, but a company spokesperson writes to Reston Now that this hasn’t happened yet.

“Harris Teeter is expected to receive limited quantities of the vaccines soon at nine pharmacies in and around Northern Virginia… appointments will be released as vaccine allocations arrive.”

Giant has taken another approach. Instead of creating its own appointment system, the grocery chain is using the vaccine supply allocated to them by the federal government to help the Fairfax County Health Department vaccinate their waitlist.

“People invited from the queue will be able to select from several Giant locations within the Fairfax Health District,” reads the health department’s blog. “Locations and details will be included in the appointment scheduler email.”