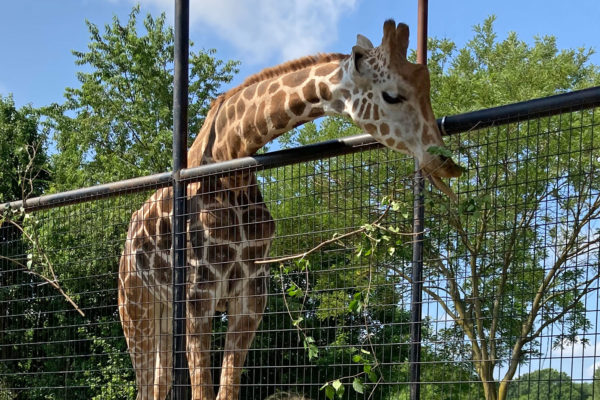 The fire was first reported at the private zoo at 1228 Hunter Mill Road around 6 p.m. In a photo posted by Fairfax County Fire and Rescue, smoke could be seen rising from the roof of the two story building.

Later, after the blaze was brought under control, the fire department announced that two giraffes were found deceased. No other animals were reported hurt.

The zoo had a popular, seven-year-old giraffe named Waffles, who children could feed with their bare hands. It was Waffles and his companion that died in the fire, the zoo confirmed Monday night in a statement posted on social media.

Tonight the Roer’s Zoofari staff and family are devastated following a barn fire that claimed the life of our beloved giraffe, “Waffles” and his new giraffe companion yet to be named.

Zoofari owner, Vanessa Roer, received the call at 5:30 PM from Fairfax County dispatch that the barn where the giraffes was housed in caught fire. Staff and the zoo’s veterinarian arrived within minutes to help rescue and care for approximately 20 other animals housed in the same area. We are grateful that no staff members or other Zoofari animals were injured or lost.

Grief counselors are being made available for staff, who are devastated by this tragedy and who cared deeply for these members of the Zoofari family.

Please note that Zoofari will be closed until further notice. Thank you for all of your support and condolences to our zoo family during this time.

Thank you to Fairfax County Fire and Rescue Department for responding so quickly.

Investigators are now on scene, trying to determine how the fire started.

Roer’s Zoofari, located near Lake Fairfax Park, was formerly known as Reston Zoo before its current owners took over in 2016. The new ownership followed a controversy in which the former zoo director pleaded guilty to animal cruelty charges.

Units are currently on the scene of a barn fire in the 1200 block of Hunter Mill Rd in Reston.
First arriving reported fire from the roof and on two floors of a 2-story barn. Unknown at this time if any animals in barn. Hunter Mill Rd/Cobble Mill Rd closed. Avoid area. #FCFRD pic.twitter.com/HjjvvP4bTa

UPDATE: 1200 block of Hunter Mill Road: The fire is under control. Tragically, two giraffes were found deceased. No other animals injured, and all are being attended to by zoo staff. No reported firefighter injuries at this time. Fire investigators on scene. #FCFRD pic.twitter.com/uT1ND7lnvD