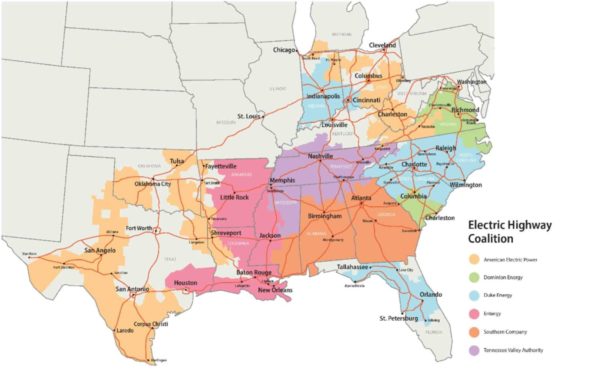 Dominion Energy plans to have new electric vehicle charging stations up and running in Northern Virginia this year, joining five other utility providers to create an interstate charging network that could extend from D.C. to western Texas.

The provider announced last week that it is partnering with American Electric Power, Duke Energy, Entergy Corporation, Southern Co., and the Tennessee Valley Authority to form the Electric Highway Coalition, which will provide electric vehicle charging infrastructure along major highways within their service territories.

About 18 million EVs could be on U.S. roads by 2030, according to estimates from The Edison Electric Institute. But while charging options becoming more plentiful to support everyday travel, anxiety remains among drivers about how to tackle long-distance road trips.

Dominion wants to enable electric long-distance travel for customers and its company fleet on major interstates and other well-traveled roadways, spokesperson Peggy Fox said. The charging stations will be capable of getting drivers back on the road in approximately 20-30 minutes.

“For example, in Virginia, we want to enable EV drivers to travel from the mountains to the beach or from the nation’s capital to the Virginia coast,” she said.

New stations in Fairfax County could be along I-66, I-95 and 495, and other well-traveled roads, she added. The stations will be about 100 miles apart or less, but exact locations and a concrete timeline have yet to be established.

Dominion will be coordinating with the other utility partners to provide sufficient charging capacity while using existing infrastructure and avoiding duplication, she said. The utility company plans to have a minimum of two charging stations at each location.

It has also been working with the state and locally with Fairfax County government to electrify transit. It rolled outelectric school buses in January, and in October, it debuted a self-driving shuttle that runs between Dunn Loring Metro Station and Mosaic District.

Del. Mark Keam (D-35th), who represents part of Tysons and has supported many environment-focused bills, said he welcomes Dominion’s new partnership as a “good news story,” but the General Assembly approved a number of bills in its recent legislative session to indicate the state government is serious about electrifying transit, too.

“No company is going to go do things on their own, without knowing what the state will do as a partner,” Keam said. “Us providing that level of priority allows Dominion to say, ‘OK, here’s what we will do.'”

Virginia will join a dozen other states that have adopted clean car standards requiring low- and zero-emission vehicles to be available, he said. It will also be providing a “small but still meaningful rebate” for those looking to buy one.

“We’ve really put Virginia on the map,” he said.

Still, Keam added that Dominion’s role in electrifying transit should be an ongoing discussion. It owns substantial infrastructure and supplies much of Virginia’s power, so the utility needs to be included, but state lawmakers have been unable to agree on a regulatory approach.

“We have to look at all of this with clear eyes,” he said.