The cicadas are here, along with a new rap about the insects from local hip-hop artist MC Bugg-Z.

“Brood X-cellence” is a deep rhyming dive into the entomology, science, and emergence of Brood X, the periodical cicadas that are just now surfacing from their 17-year slumber underground.

Lines like “I have been chilling underground with my friends sippin on root juices” and “It’s a fitness thing, you’re witnessing predator satiation” will certainly have wings flapping and red eyes darting.

The song is written and performed by MC Bugg-Z, who isn’t just any old bug-loving underground hip-hop artist. He’s an entomologist and biologist who works for Fairfax County.

Lima has been writing and recording underground hip-hop since his college days in the mid-2000s with a focus on intelligent lyric writing.

“It’s more about the rhymes than the beats,” Lima said. “I love to convey the knowledge about the things I love and the world I know…by putting it into hip-hop song form.”

In Lima’s case, that’s bugs, and this isn’t his first foray into the emerging genre of insect rap.

In 2016, he released “Zika 101” about protecting oneself from disease-carrying mosquitoes. In 2018, there was “Tick-Check 1-2” about checking for ticks and avoiding Lyme Disease, followed a year later by “West Nile Story.”

While cicadas are not known to carry disease, Lima couldn’t skip the opportunity for a new song about a bug.

“Brood X-cellence” is a remix or sequel of sorts to a cicada rap he wrote back in 2004, when the brood last emerged. He was a student at Indiana University back then, and the din of the cicadas could actually be heard in the background of the recording.

“I was going to just re-release that one this year and just felt like there were things about the song that I wanted to change, new information that I wanted to include and, also, some errors,” Lima said. “I’ve learned some stuff over the past 17 years…Now, the focus is much more on the biology of it as opposed to the spectacle itself.” 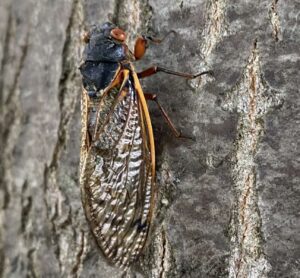 When he writes songs, Lima takes a reverse-engineered approach. He thinks about how he wants to end a line and then finds a rhyme to match it.

“I don’t shy away from the scientific words because they are multi-syllables,” Lima said. “You can often find a way to rhyme them or, even, define some of these terms [in the rhyme]…like predator satiation.”

It took about two weeks to write, re-work, and record “Brood X-cellence.” The beat was provided by Kelton Williams, another Fairfax County employee who Lima met while helping with COVID-19 emergency response.

The main takeaway that Lima wants folks to get from the song is that this cicada takeover is an incredibly rare and amazing occurrence.

“It’s a fleeting event, a miracle of nature,” he said. “It really only occurs in the eastern half of the United States and nowhere else in the world…It’s just so rare that the public is kind of overrun with insects.”

He hopes his bug rap educates, entertains, and allows folks to have a little fun after a difficult year.

With the temperatures warming, particularly in the evening, the cicadas are expected to come out of the ground en masse within a matter of days, looking to play their own song.

“We’re really going to see the surge that’s just beyond,” Lima said. “So, hopefully my song is well-timed.”