(Updated at 1:20 p.m.) The spread of COVID-19 has slowed to the point where the Fairfax Health District actually subtracted cases from its overall total today (Monday).

According to the latest data from the Fairfax County Health Department, the district — which includes Fairfax County and the cities of Fairfax and Falls Church — has seen seven fewer cases than previously reported, suggesting an error in earlier case counts.

The Fairfax Health District actually reported 10 new COVID-19 cases today, but 17 cases that had been assigned to the district have now been removed, resulting in the negative number, according to FCHD spokesperson Tina Dale.

“Data is reviewed by the Virginia Department of Health and adjustments are made based on those reviews,” Dale told Reston Now. “With low overall numbers of new cases, we may continue to see days where ‘negative numbers’ are reported.”

Dale says cases are sometimes removed primarily because they actually occurred in another health district, or because there are duplicates.

“Duplicate cases can occur because VDH has a process where new COVID labs are automatically processed and counted as a new case, which on further review is identified as a duplicate,” she said.

Even so, COVID-19 case levels have continued to drop in the county since the seven-day average peaked for this spring at 194.4 cases on April 13, Virginia Department of Health data shows. The weekly average is now at 23.6 cases — the lowest since there were 22.3 cases per seven days on March 29, 2020.

The Fairfax Health District has recorded a total of 77,837 COVID-19 cases since the first presumptive positive case was identified on March 9, 2020. 4,105 people in the district have been hospitalized, and 1,116 people have died from the disease caused by the novel coronavirus. 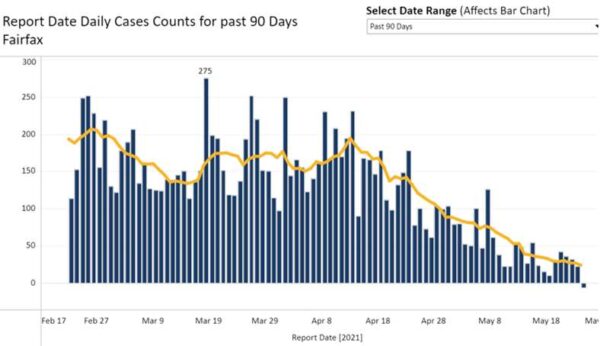 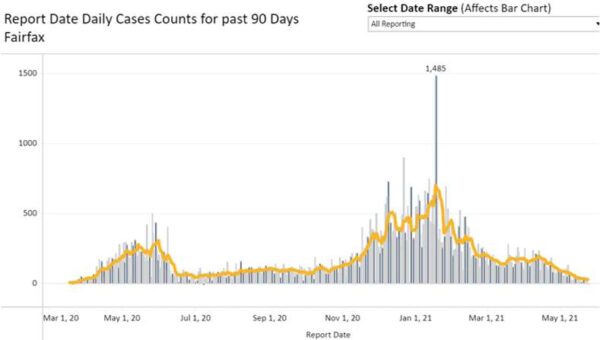 The steady decline in new cases has continued even after Virginia amended its mask-wearing mandate more than a week ago to exempt people who have been fully vaccinated, a heartening sign as the state prepares to lift all capacity and social distancing requirements on Friday (May 28) in time for Memorial Day weekend.

The Commonwealth can keep requiring masks for people who aren’t fully vaccinated and in certain settings, such as schools, as long as its public health emergency for the COVID-19 pandemic remains in place. Gov. Ralph Northam’s executive order is currently set to expire at 11:59 p.m. on June 30, though it could be extended or rescinded before then.

Since Northam announced that capacity limits will be lifted at the end of May, rather than in June as initially suggested, vaccinations have become more widespread, while COVID-19 cases have fallen statewide.

With 7.9 million vaccine doses administered overall, 4.5 million Virginians have received at least one dose, amounting to 53.2% of the total population and 65.7% of all residents 18 and older.

3.6 million people — or 42.5% of the total population and 53.5% of all adults — have been fully vaccinated, meaning that at least two weeks have passed since they finished their recommended shot regimen.

Fairfax County has administered 1.1 million vaccine doses. 638,091 residents — 55.6% of the total population — have gotten at least one dose, and 501,845 residents — or 43.7% of the population — have been fully vaccinated, though unlike with VDH’s statewide data, those numbers still don’t include doses delivered by the federal government.

Image via CDC on Unsplash, graphs via Virginia Department of Health

More Stories
Free music concerts are coming back to Reston this summerPet of the Week: Robbie