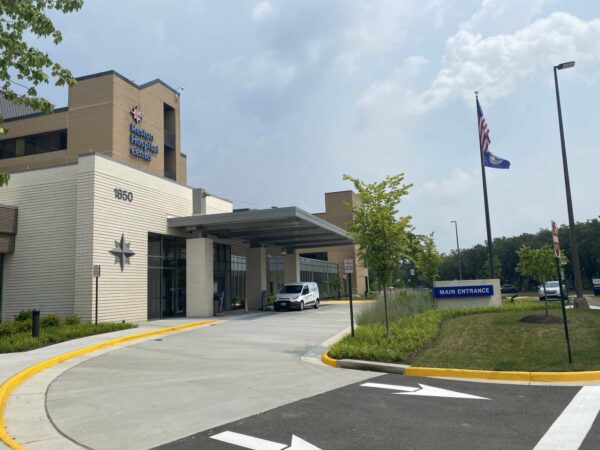 On June 26, Reston Hospital Center announced that it had zero COVID-19 patients for the first time since the pandemic arrived in Fairfax County 470 days earlier.

That moment of celebration would prove to be too-short-lived, but it still provided an occasion for top Reston Hospital officials to reflect on how far they have come over the past 18 months — and how much more work may lie ahead.

The Virginia Department of Health confirmed the Commonwealth’s first COVID case on March 7, 2020, but Reston Hospital officials believe they had at least one case about a month earlier than that.

“Because of our proximity to Dulles, we started seeing patients very, very early,” Chief Medical Officer Dr. Tom Taghon told Reston Now in an interview last week at the hospital.

He recalls one patient in particular who had flown internationally and was sent to their emergency room in early February 2020.

“[The patient] was probably the first COVID patient we had, though because of the [lack] of testing capabilities, we couldn’t prove it,” he said.

Early in the pandemic, individuals who tested positive at Dulles International Airport were often brought to Reston Hospital.

Now that vaccines are available and scientists have a clearer understanding of how the novel coronavirus functions, Taghon notes that it may be easy to forget how uncertain those early days of the pandemic were and how much was being discovered about COVID every day.

“What the public may not fully appreciate was that this was a really… a rapidly evolving situation and that was a real challenge for us,” Taghon said. “We would literally change pretty significant policies overnight because we learned something new. Things changed quickly.”

Those early experiences led the local hospital to be among the first, they say, to restrict visitation, require masks, and to realize that it didn’t matter if a patient had traveled to a hotspot.

“The disease was spreading very rapidly [that] pretty early we made the conclusion it doesn’t really matter if they were actually in China or not,” said Taghon.

Soon, much of the other things that were happening at the hospital — surgeries, screenings, and other care — slowed down to a trickle. Many of the staff working in other units came over to help with the ICU.

Monica Oakcrum, the director of critical care at Reston Hospital, says it was a real challenge explaining to families why visitation was restricted in those early days.

“Families were frantic understandably and it was a real struggle,” Oakcrum said. “But we [had to] protect our patients, the community, and our staff.”

The stress and burnout was intense for doctors, nurses, and staff, but frontline healthcare workers heard from the community how much they were appreciated.

In the earlier days, Restonians would come out and cheer during shift changes. Meals and handmade cards from children were delivered to the hospital.

“Those things really did make a huge difference,” Oakcrum said.

After the initial surge in spring, the situation started improving at Reston Hospital in the summer. But like in the rest of the region and nation, a second peak hit during the holiday season.

“[For] me that was the hardest point,” said Taghon. “You thought you got off the mat the first time, but you’re getting punched again.”

What made this different, however, was that vaccines were on the way. It was a light at the end of the tunnel, but it didn’t mean the pandemic was over.

“We have nowhere near the peaks we’ve seen before, but we have definitely seen a rise [in cases],” Taghon said of the last several weeks. He says he’s “confident” at least some of these cases are of variants.

Getting more people vaccinated is the key to stopping this pandemic, the doctors say. Both Oakcrum and Taghon were among the first staff members in their units to get vaccinated.

Reston Hospital doesn’t require staff to be vaccinated, though they are being “strongly encouraged,” Taghon says.

As in the rest of the country, the overwhelming number of patients hospitalized at Reston are unvaccinated, the hospital confirms. While vaccination rates are higher in the region than the rest of Virginia and the county, the doctors say a 58% fully vaccinated rate isn’t high enough for herd immunity.

The new findings led the CDC to change its mask recommendations and raise alarms about another surge in infections.

“That’s my major concern,” said Taghon. “I don’t think we’re out of the woods yet. The best way forward for us is to really increase our vaccination rates.”