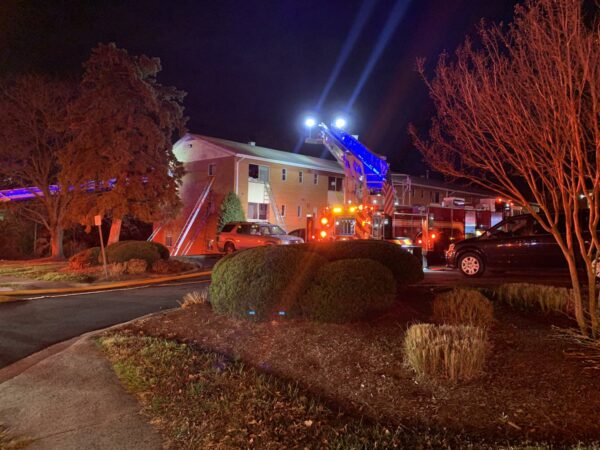 (Updated at 9:28 a.m.) Two residents have suffered life threatening injuries and seven others were taken to a local hospital after a fire broke out at garden apartments on Park Avenue in the Town of Herndon at around 6:30 p.m. on Thursday.

Eleven apartment units on the 800 block of Park Avenue are considered uninhabitable and 44 residents were displaced.

The Fairfax County Fire and Rescue Department described a dire scene at the site of the fire. A mother and three young children evacuated one unit by tying bedsheets together to make a makeshift rope.

Occupants jumped out of third story windows above the second floor unit where the fire initially started.

One rescue crew rescued three residents via a ladder. The four occupants in the apartment where the fire started self-evacuated safely.

The Herndon Police Department advised that a lengthy closure between Station and Grace streets was expected. The area opened up several hours after the incident.

The fire was caused by an electrical event involving a charger cable, according to the fire department.

Damages amount to $287,500. There were no working fire alarms in the building where the fire started.

END_OF_DOCUMENT_TOKEN_TO_BE_REPLACED

More Stories
A proposal to invest $250,000 to beautify Lake Anne plaza is picking up steamMorning Notes