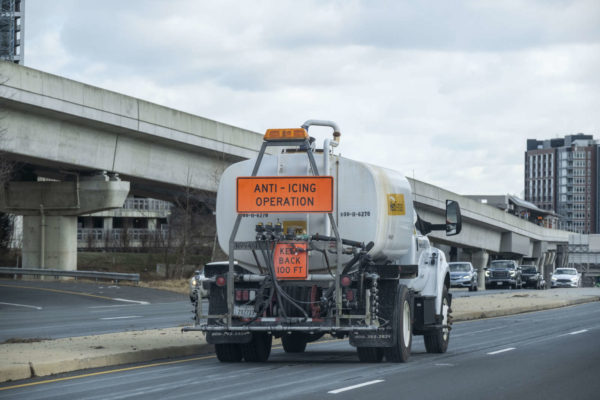 White brine lines are a familiar sight on Fairfax County roads before snowstorms, such as the one that passed through the D.C. area last weekend.

Not too long ago, though, winter weather preparations involved scattering tons of dry salt and sand on streets, sidewalks, and other outdoor surfaces.

The adoption of brine to prevent snow and ice from sticking to pavement is part of a regional effort to limit the use of salt, which is effective — and cheap — as a de-icing material but pollutes the environment and corrodes infrastructure.

“What we’re trying to do is walk that fine line between protecting the natural resources, but at the same time, providing the need for public safety,” said Normand Goulet, a senior environmental planner for the Northern Virginia Regional Commission (NVRC).

NVRC is overseeing the implementation of a Virginia Salt Management Strategy (SaMS) that the state Department of Environmental Quality released last year as a guide to minimizing the dangers of salt.

In the works since 2018, the strategy was developed by a committee that included Fairfax County staff after a water quality report identified de-icing salt as a primary contributor to excessive levels of chloride in Accotink Creek, affecting wildlife in the 51 square-mile watershed.

According to the Fairfax County Department of Public Works and Environmental Services (DPWES), one teaspoon of salt can permanently pollute five gallons of water.

The department advises residents to shovel snow early and often, apply salt only where needed, and sweep up extra material for reuse. Viable alternatives to salt include sand, wood ash, and native bird seed.

The SaMS toolkit encourages local and state government agencies to pay closer attention to the salt they use for anti-icing, which comes before snow to prevent accumulation, and de-icing, which removes snow and ice during or after a storm.

“It’s only been within these last few years where people have started to look at, okay, how can we cut down on the amount of salt we’re applying?” Goulet said.

The Virginia Department of Transportation began this winter with 250,000 gallons of brine, 120,000 tons of salt, and 25,000 of sand just for Northern Virginia.

The agency primarily uses dry sodium chloride, or rock salt, to remove snow, but it has increased its use of liquid brine for anti-icing in recent years.

While some jurisdictions, like D.C., mix brine with beet juice, VDOT’s brine consists of 23% salt and 77% water. The mixture still contains chloride, but it reduces the amount of rock salt and other chemicals needed after snow falls.

If the snow is preceded by rain, though, brine will get washed away, so the materials used vary depending on weather conditions and the type and duration of each storm, VDOT Northern Virginia spokesperson Kathleen Leonard says.

The Jan. 3 snowstorm required about 35,000 tons of salt, based on how much VDOT ordered afterwards to replenish supplies.

“The Virginia Department of Transportation’s number one priority is ensuring the safety of the traveling public,” Leonard said by email. “We continue to refine best practices to support the most efficient, safe and effective use of materials through research and improved management approaches to both save money and reduce potential impacts.”

Leonard added that VDOT is studying the effectiveness of treating roads with brine during storms.

To manage their salt use, VDOT and Fairfax County have also been utilizing different kinds of equipment and adjusting operating procedures.

For example, VDOT has trucks that can control how much salt is spread based on speed, delivering less salt when they’re driving slower and none when at a standstill.

“We continue to pilot efforts with our crews and contractors to track and analyze using additional hardware on equipment as part of snow removal efforts in Northern Virginia,” Leonard said.

DPWES, which provides snow removal for most Fairfax County facilities, county-maintained and developer roads, and some walkways to Metro stations, has acquired three new salt domes since it started phasing in SaMS recommendations in 2018.

Goulet says improving storage, cleaning up extra salt instead of leaving it on the ground, and other changes make a difference, but it may take years to see results in local water chloride levels.

“It’s kind of hard to use ‘How much did you put down this winter?’ as a metric of measurement, because it’s completely variable on how severe the winters are,” Goulet said. “…It should show up in a record of what water impairments look like, but again, that’s going to be a long-term thing.”