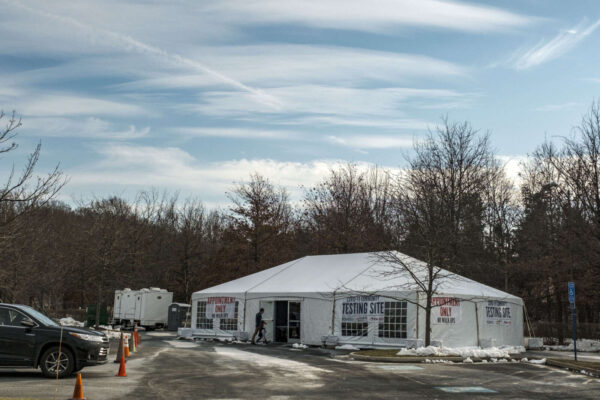 The COVID-19 testing site at the Fairfax County Government Center has closed less than a month after its launch.

The Virginia Department of Health shut down the Community Testing Center yesterday (Wednesday) as part of a statewide shift away from mass test sites in favor of a mobile “CTC+” initiative focused on communities with accessibility barriers.

“As the community response has decreased at the large-tent, fixed testing sites, the Virginia Department of Health is transitioning to a flexible response where the testing van can be moved and located in areas with low access to testing,” VDH COVID-19 Testing Co-Lead Suzie Trotter said by email.

The Fairfax County CTC opened on Jan. 15 in response to the omicron variant’s arrival in December, which pushed local Covid caseloads to record heights and triggered soaring demand for testing that strained limited supplies.

Trotter says the number of tests conducted at VDH’s nine CTCs “dropped off significantly over the past week,” as the latest surge in the pandemic has started to recede. The supply shortage has also eased with an increased availability of testing kits through pharmacies and other retail sites, along with the launch of a federal program that mails free at-home kits.

The Fairfax CTC conducted tests for 4,394 people over its 19 days of operations, according to Trotter, who says the closure date was determined far enough in advance to cut off appointments.

Set to begin operations on Tuesday (Feb. 15), the CTC+ initiative consists of vans that will travel to different locations with no-cost PCR diagnostic tests based on community need, as requested by local health departments.

There will be just one van to serve the entire Northern Virginia region, but Trotter says it will “maintain a weekly presence” in the Fairfax Health District, though an official schedule has not been determined yet.

The Fairfax County Health Department will evaluate a variety of factors when choosing testing sites, such as case levels and positivity rates, the availability of existing testing resources, and accessibility, spokesperson Lucy Caldwell told FFXnow.

“This resource joins other FCHD testing resources that will continue to target communities most in need of testing,” Caldwell said by email.

Other testing options include health care providers, retail pharmacies, and FCHD clinics. The county has also restarted its mobile laboratory, which tests people with symptoms and is next scheduled to appear at the Safeway at Engleside Plaza in Mount Vernon.