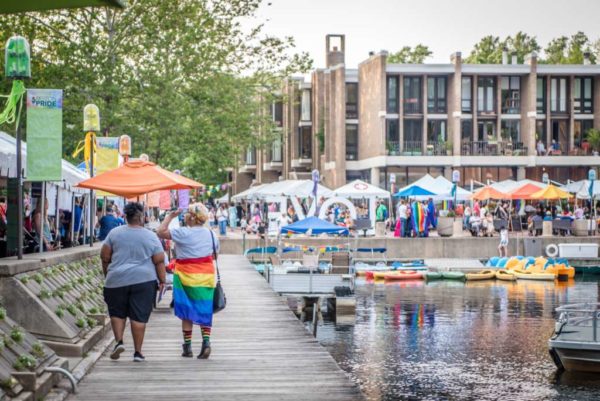 After the COVID-19 pandemic wiped out last year’s festivities, the Reston Pride Festival is back and as committed as ever to both celebrating and advocating for the local LGBTQ community.

This year’s event has been divided into two days, starting this Saturday (June 5) with a virtual festival and marketplace that will go from 2 to 6 p.m. An in-person festival with a free public concert will follow two weeks later at Lake Anne Plaza on June 19.

Nathan Hagen, who serves as treasurer for Reston Pride, an independent nonprofit under the CORE Foundation, says the board decided in December to plan virtual events for the festival to guarantee it would take place in some form, regardless of the state of the pandemic.

That certainty felt important after the experience of putting together the 2020 festival, which had been almost entirely booked and planned out when it was put on hold last spring. Organizers initially hoped to push it back to October, but it ultimately had to be canceled.

“COVID wasn’t gone, you know, in October. It was still taking the life of many, many people in our community and around the world, as it still is today,” Hagen said. “…If someone isn’t vaccinated or even if they are and they just don’t feel comfortable being in a public space, we wanted to create a virtual festival that would give them the ability to still feel a sense of community and, more importantly, celebrate Pride.”

Hagen promises that Reston Pride will still be “very much a party,” but the virtual element also enabled organizers to broaden their approach to programming with the addition of panel discussions on issues that LGBTQ individuals continue to face.

One panel will discuss aging in the LGBTQ community, including discrimination in elder care facilities, and another will deal with issues relevant to families, including families with LGBTQ children and queer couples who are interested in starting a family.

“Both of those panels are going to have some dialogue and perspectives from members of our community and from experts in the area, which we’re really looking forward to hear from them,” Hagen said.

The virtual festival will be headlined by actor and The Trevor Project advocate BD Wong, who will also hold an in-person talk at 8 p.m. that day at Reston Community Center’s CenterStage. For Reston Pride, he provided a video about the importance of supporting marginalized groups from his perspective as an openly gay, Asian American individual.

While the in-person festival will primarily focus on entertainment, led by the D.C. band Wicked Jezabel, it will also acknowledge Juneteenth, which falls on the same day, with a dance performance by Yauri Dalencour and opening remarks from Washington Plaza Baptist Church Rev. Michelle Nickens.

According to Hagen, the in-person festival will not have a cap on attendees after Virginia lifted COVID-19 capacity limits starting last Friday (May 28), but activities and vendors will be spread out to minimize crowding, and masks will be strongly encouraged in accordance with county and state guidance.

Because of the spacing limitations, Reston Pride cut off the number of vendors included this year to 45 organizations, including 10 nonprofits. Hagen says the board of directors offered free space for LGBTQ-oriented nonprofits to share their message and drum up support for their causes in recognition of the challenges that many groups encountered over the past year.

Proceeds from this year’s festival will go to future Reston Pride events and programs along with the nonprofit Rainbow Families, which provides education and support to LGBTQ families and prospective parents.

As the only Pride festival in Northern Virginia, Reston Pride’s organizers make an effort to maintain a focus on the local community and the grassroots spirit with which the festival launched in 2018.

A full list of festival events can be found on the Reston Pride website. Anyone interested in volunteering to assist with the in-person festival can fill out a sign-up form or email the organizers at [email protected] 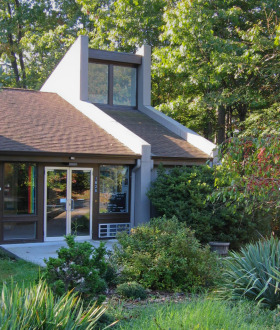 The Unitarian Universalist Church in Reston will reinstall a rainbow flag that was taken nearly a month ago.

The new flag, which will be installed tomorrow, replaces one that was removed by vandals in the same location outside the church atop a hill on Wiehle Avenue.

Local police have not provided any details about the suspected vandalism.

Rev. Debra Haffner said the church is committed to replacing every stolen flag “even if it means putting up a new flag each month.”

“We are a welcoming faith community and we want everyone who drives by our church in Reston to know that all people – gay, straight, pansexual, bisexual, transgender – are welcome here. Our faith celebrates that sexual and gender diversity is a blessing, and our flag is a symbol of that commitment,” she said.

The church has the only freestanding rainbow flag in Reston that is up year-round.

The 11-foot flag was removed on June 11, one week after the church co-sponsored the Reston Pride Festival. Roughly 5,000 people came out to celebrate the second annual event at Lake Anne Plaza.

In the last several months, the flag was taken three times. It was installed in 2017 without incident until this spring.

A rainbow flag outside the Unitarian Universalist Church is missing for the third time in three months.

Rev. Debra Haffner says that the 11-foot flag was stolen on Tuesday, June 11.

The church has been very vocal in advocacy for LGBTQ rights. It organized the first ever Reston Pride Festival last year. This year, the festival was held at a new and larger location at Lake Anne Plaza.

“We are deeply saddened that some person or persons have chosen to steal our flag and hope that it will be returned to us. More, we hope for an opportunity to create an opportunity for restorative justice with that person or persons so that they will come to understand and accept all people, regardless of their sexual orientation, gender identity or gender expression,” said Haffner.

The missing flag was reported to the Fairfax County Police Department, which is investigating who tore down the flag.

Haffner says she fears the incident qualifies as a hate crime. She says her church is open to purchasing a flag for any faith community that requests it.

“We will continue to fly a rainbow flag on our property even if it means buying a new one every month. We hope that other churches, synagogues and mosques will put a rainbow flag on their property, so that all will know that people of every faith in Reston support and celebrate the LGBTQ+ community.”

Until this spring, a rainbow flag has flown on UUCR’s property since 2017 without incident.

Organizers of the Reston Pride Festival, which was held on Saturday (June 1), have already set the date for the next festival after this year’s successful event.

More than 5,000 people took part in the festival, which featured choral groups, dancers, speakers and dozens of exhibitors and vendors.

Since its inaugural event at a local church two years ago, the festival has rapidly expanded. The event was cosponsored by three Reston churches: the Universalist Unitarian Church in Reston, St. Anne’s Episcopal Church, and United Christian Paris.

During the event, state Del. Ken Plum (D-36th) said the festival was an example of Reston’s reputation as an “open community.” State Del. Danica Roem (D-13th) also delivered remarks at the event.

Organizers recapped the event, which was staffed by more than 60 volunteers:

In addition to community choirs and speakers, attendees at Reston Pride were treated a variety of musical performances. Delta B Knyght, a DC-based drag performer, and Ken Williamson, minister of music for Washington Plaza Baptist Church, were the emcees for the event. Rev. Michelle Nickens, minister of Washington Plaza Baptist Church, penned and performed Reston Pride Blues, a catchy song designed to capture the spirit of Reston Pride Monika Chaturvedi and friends provided a bit of international flair with a Bollywood Dance performance.

A location for next year’s festival has not been announced. 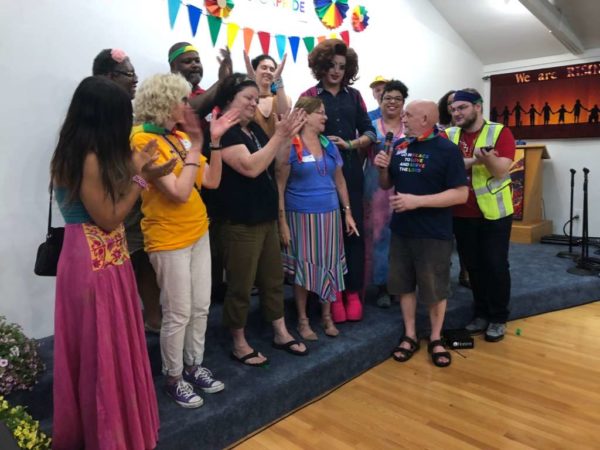 After a successful turnout at its inaugural event in a local church last year, the second annual Reston Pride Festival returns tomorrow (June 1) with a new location at Lake Anne Plaza.

The event, which aims to celebrate and support Reston’s LGBTQ community, is co-chaired by the Unitarian Universalist Church, St. Anne’s Episcopal Church, and United Christian Parish.

Building on last year’s event, the festival will feature entertainment, music, food, education and celebration, according to event organizers.

“The Lake Anne Plaza venue offers not only more space but greater visibility and access — and brings the festival into the heart of Reston, which is fitting as Reston since its founding in the 1960s has been committed to the principles of equality and inclusion.”

The schedule for the event is below: