Note: Community Day 2016 has been cancelled.

There will be family activities, food, music, entertainment and the annual Southgate’s Got Talent show.

“It’s a great opportunity for neighbors to come and socialize, meet other neighbors, and have your kids enjoy moon bounces, popcorns, free county candy,” says Southgate Community Center Director Richard Cabellos. “Community Day is definitely a celebration of everything Southgate has to offer and also a celebration of the partners who helped Southgate become what it is today.”

The new Southgate Community Center opened in July 0f 2006. The project was a joint effort by Reston Association; the local Southgate and Stonegate communities; the Reston Community Center; and a number of county agencies, including the Fairfax County Police Department.

The group gathered grants and bonds to pay for the $4.5 million center, which offers recreational and educational programming for an underserved population.

The new Southgate replaced an aging basketball court and pool with a 7,733-square-foot facility that has room for a variety of indoor and outdoor programs. The property on which the Southgate Community Center is built is owned by the Reston Association, but leased by Fairfax County. Reston Association members voted to lease the property to Fairfax County for a period of 99 years.

The Washington West Film Festival, going on now in Reston and other Northern Virginia locations, is taking the show (s) on the road Friday night.

There will be free movie screenings at Southgate Community Center, 12125 Pinecrest Rd., beginning at 7 p.m.

The feature presentation is Coach of the Year, about comedy about a Richmond swim team’s quest to win a state championship even though they have no pool in which to practice.

Coach of the Year Director David Stott will also be in attendance for a Q&A with the audience.

Admission and snacks are free. Donations are accepted, and they will be donated to the Robert Duvall Children’s Fund) 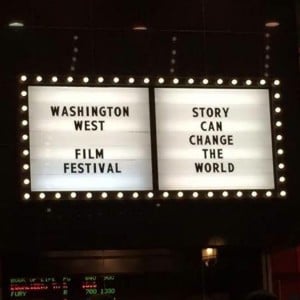 Northern Virginia moviegoers will be taken back to 1955 and to the hills of Austria, among dozens of other destinations, at the fifth annual Washington West Film Festival.

The festival runs from Oct. 21-27, with movie showings at Bow Tie Cinemas Reston Town Center and other Northern Virginia locations.

The festival kicks off on Oct. 21 with a screening of the Back to the Future trilogy at 7 p.m., said Reston outreach coordinator Andy Sigle. Oct. 21, 2015 is where Marty McFly and Doc Brown landed when they time traveled in Back to the Future.

The film festival will also hold a red carpet showing of the first film on Sunday, and actor Christopher Lloyd, who played Doc and Bob Gale, one of the trilogy’s writers, are expected to attend, Sigle said.

The festival will also feature a 50th anniversary screening of The Sound of Music at The Barns of Wolf Trap on Oct 24 at 7:30 p.m.

The festival includes more than 45 other films, including featured, independent and short films and documentaries. Among the highlights: a showcase of films by George Mason University students; a documentary about Matt Rutherford, the first person to sail alone around North and South America; and a documentary My Friend Ed, about longtime actor Ed Asner the reality behind heroes vs celebrities.

See the full schedule and purchase tickets on the Washington West website.

This year, the festival is trying to reach further in the Reston community, Sigle said. Sigle says there will be streetlight banners at Reston Town Center drawing greater awareness for the event.

“We’re trying to be much more out front with people in the Reston Town Center.”

The festival is reaching out to parts of the Reston community that usually do not attend the festival, such as those living near the Southgate Community Center, Sigle said.

To remedy that, there will be a free screening (donations accepted) at Southgate of Coach of the Year, a movie about a swim team struggling to practice without having a pool, at the center. Two short films, Taking Flight and The Gift, will also be shown.

“We’ll take the film festival to that area of Reston instead of hoping that area will come to us,” Sigle said.

The proceeds of this year’s festival will go the Robert Duvall Children’s Fund.

“It is kind of cool that the festival combines the love of the arts and philanthropy,” Sigle said. 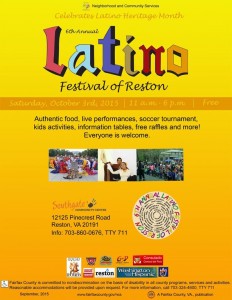 Update, Thursday 3:40 p.m.: With several inches of rain in the forecast for Saturday, the annual Latino Festival of Reston has been canceled.

Original story:  The community is invited to celebrate Latin American culture at the sixth annual Latino Festival of Reston.

There will be games, face painting, moon bounces, music and entertainment, and a youth 4-on-4 soccer tournament.

There will also be community resources, such as health screenings, and exxhibits from various agencies providing information about the programs and services they offer.

Food will be available for purchase from participating vendors. 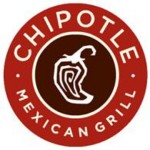 Head to Reston Town Center’s Chipotle Mexican Grill (11913 Freedom Dr.), where the restaurant is donating 50 percent of its proceeds to Southgate Community Center. The offer is good from 4 to 9 p.m.

Southgate is a Fairfax County-run community center that largely serves a minority population in Reston. It offers many recreational and after-school programs.