For more than two months, Reston Town Center’s Vapiano has been closed amid allegations of an international money laundering scheme.

The case, which was filed in May in U.S. District Court in the Central District of California, continues to rattle the company. The RTC location’s doors have been shuttered for more than two months.

A spokesperson for Vapiano said the company has not announced a reopening date. The new owners — Plutos Sama Holdings, Inc. (PSH) — are expected to provide an update soon.

Representatives of PSH alleged that individuals attempted to take over the chain and intentionally thwart PSH’s attempts to maintain operation of three Vapiano locations.

According to court documents, the complaint alleges the individuals — including one man known as the “King of Ports” — attempted to launder money through the restaurant chain, including funds amassed through questionable shipping transactions in Guatemala.

So far, little to no movement has been made in court. According to the docket, the case was assigned to a local judge, but no updates from the accused parties have come forward.

In early June, an attorney representing PSH expected the restaurant to open within a month. That attorney has not returned repeated calls and emails from Reston Now over the last three weeks.

Prior to the extended temporary closure that began in late May, the RTC location closed sporadically throughout the year. Prior to the release of the suit, company officials told Reston Now the company was undergoing major restructuring, training, and managing payroll delays.

For weeks, Reston Town Center’s Vapiano has suddenly and sporadically shuttered its doors amid allegations of an international money laundering scheme and attempts to disrupt operations of countrywide locations of the fast-casual restaurant chain.

In a May 27 complaint filed in U.S. District Court in the Central District of California, Plutos Sama Holdings, Inc. (PSH), a Delaware-based corporation that bought shares of Vapiano’s parent company earlier this year, alleges that individuals seeking to take control over the chain attempted to jeopardize its legal acquisition and operation of three Vapiano locations in Florida and Reston.

A legal representative for PSH told Reston Now the Reston location expects to open in about a month as litigation continues. The Reston location closed last month due to what company officials called “major restructuring” and “operational changes.” The restaurant had on-and-off closures in March because of training and delays in the processing of paychecks.

The lawsuit, which was obtained by Reston Now, alleges that a group of individuals, including Jurg Widmer, worked together to launder money through a restaurant location in Doral, Florida. PSH says it has uncovered evidence indicating that restaurant was funded by an international money laundering scheme disguised as a trust to “mask the funds unlawful origins.” The complaint further alleges that Widmer, who is described in the document as “the King of Ports,” amassed his fortune through corrupt shipping transactions in Guatemala.

Widmer moved to Switzerland to escape allegations of being involved in an illicit bribery conspiracy, according to the document.

The suit also alleges that he worked with a friend to create a shell company, VAP Invest, LLC, and VAPvest Corp. to funnel and hide illicit proceeds in legitimate enterprises. Attempts were made to obtain a franchise license to operate the restaurant in Doral despite the franchisor’s refusal to grant “anyone associated with the Widmer family a franchise license.”

The complaint also claims Widmer and his partners launched a “smear campaign” designed to encourage restaurant employees to quit and refuse to cooperate with the company. The document states that Widmer’s representatives sent threats and intimidating notes that were so aggressive that they prevented the company from working with restaurant staff. In some cases, employees were encouraged to quit, strike or refuse to work with the company as the new manager of the business.

Payments to the restaurants and its employees were also interrupted as part of this effort, according to the complaint. In one instance, the complaint alleges one of Widmer’s partners removed a manager from the Reston restaurant without notice, leaving a “management vacuum” at the eatery.

Employees at the Reston location reported missed and delayed paychecks in previous weeks.

The company is seeking damages and demanding a jury trial. The 35-page complaint is below.

Complaint Vapiano by FatimahWaseem on Scribd

In a flashback to “store closed” signs that sporadically appeared and disappeared in March, Reston Town Center’s Vapiano is temporarily closed once again.

The Reston location (1875 Explorer Street) is facing potential litigation, according to an attorney representing the restaurant chain’s new owners.

The location has faced a rocky transition after Vapiano SE, which operates the international restaurant chain, announced it would sell shares of Vapiano Holding USA and seven of its U.S.-based subsidiaries to Plutos Sama Holdings, Inc. earlier this year.

Corcoran said he could not explain why the restaurant is temporary closed due to attorney-client privilege.

“I can’t speak further on any issues,” he said.

In a tweet posted yesterday (May 20), the company wrote that it is “currently in a major restructuring phase” and is “undergoing operational changes” at the Reston location.

“We are doing our best to restore normality as soon as possible,” according to the tweet.

In March, the restaurant closed due to management changes and payment delays for staff. Store representatives told Reston Now that the location was transitioning to a new general manager and that payroll delays have been resolved.

The restaurant has been closed since at least May 9.

Locals may have noticed that Vapiano, a restaurant chain that serves up Italian food in a fast-casual setting, keeps posting “store closed” signs at the Reston Town Center restaurant.

The closures are temporary as the Reston location (1875 Explorer Street) undergoes management changes and payment delays for staff, which have now been resolved.

Back in January, Vapiano SE, which operates the international restaurant chain, announced it would sell its shares of Vapiano Holding USA, LLC and seven of its subsidiaries in the U.S. to Plutos Sama Holdings Inc.

An attorney representing Vapiano’s new owners told Reston Now that the temporary closures are due to a transiton to a new general manager at the restaurant.

“We wanted to make sure that we trained him properly,” said Matthew Browndorf, the founding partner at Wilson Keadjian Browndorf LLP. He added that training has caused a “little bit of a disruption.”

Training is not the only reason why tensions have flared at the restaurant.

Andrew Corcoran, a managing partner for Wilson Keadjian Browndorf, LLP, told Reston Now that a transition in the payroll system caused a “slight delay” for employees who tried to cash their checks on payday, but that the payment problems and confusion have now been addressed.

Both Corcoran and Browndorf say that all of the staff have been paid now. Each Vapiano location has about 40 employees, Corcoran said.

Corcoran said he saw the “store closed” sign, which urged locals to go to the two locations in D.C., on Saturday (March 9) morning. The sign came down and the restaurant opened up that night and remained open over the weekend, Corcoran and Browndorf said.

Then during the late afternoon on Monday (March 11), Vapiano closed again.

Reston Now spotted a new sign on the door on Tuesday afternoon saying that the restaurant was set to open at 5 p.m. Corcoran said training was why the restaurant planned to open later that day.

The restaurant didn’t reopen, though. A local sent Reston Now a photo of a new sign on the door Tuesday evening that said in all capital letters: “Store closed. Vapiano will return to regular business hours Wednesday March 13, 209. Sorry for the inconvenience,” signed “Management.”

“The schedule was thinly staffed to begin with and some staff unexpectedly called out for illnesses and other personal issues, leaving the location unable to open,” Corcoran told Reston Now this morning.

Now, the restaurant is expecting to reopen today at 11 a.m., Corcoran said. 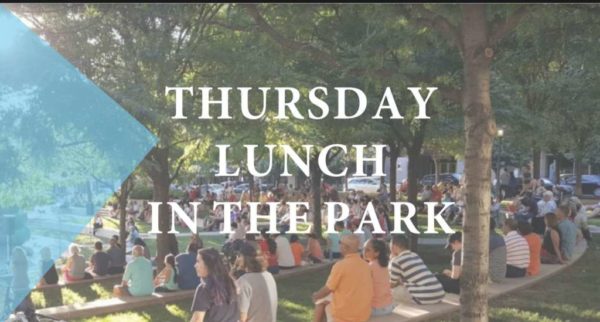 Gin Dance Company will offer a free one-hour performance. Attendees are encouraged to bring their lunch to the park. Vapiano and Le Pain Quotidien will offer brown bag specials for take-out orders placed between 11:30 a.m. and 12:30 p.m.

The event is produced by Reston Town Center Association and Reston Community Center.