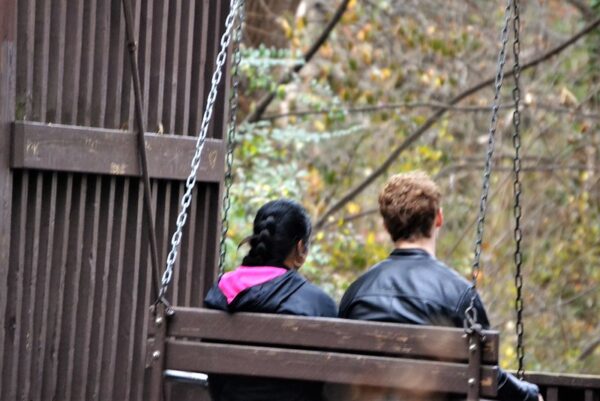 Schools Closed Today — Schools are closed today and no virtual learning will be offered. Classes are expected to resume tomorrow, despite a rise in COVID-19 cases. [FCPS]

Updated at 4:35 — FCPS tweeted that its schools will be closed tomorrow.

Earlier: This time tomorrow, locals in Reston and Herndon can expect snow, sleet and ice from a winter storm slated to hit late tonight.

Forecasts predict that snowfall will start between 3-5 a.m. on Wednesday (Feb. 20) before transitioning into freezing rain with sleet during the late afternoon. Snowfall is then expected to return before rain hits Wednesday night, according to Fairfax County Emergency Information.

The storm will likely leave between 4-6 inches of total snow accumulation and ice, posing risks for road safety.

The National Weather Service issued a Winter Storm Warning today ahead of the harsh, wintry weather.

More from the NWS:

* WHERE…The District of Columbia and portions of central Maryland and central and northern Virginia.

* ADDITIONAL DETAILS…Travel could be very difficult. The hazardous conditions could impact the morning or evening commute.

When venturing outside, watch your first few steps taken on steps, sidewalks, and driveways, which could be icy and slippery, increasing your risk of a fall and injury.

The Capital Weather Gang is uring workers to telecommute tomorrow morning. But if commuters do decide to hit the roads, they should “expect very difficult conditions,” the D.C.-area weather group tweeted.

The Virginia Department of Transportation said in a snow update this afternoon that crews have pretreated interstates and major routes throughout northern Virginia and that trucks get set up along roadways tonight so they will be ready to plow and treat roads tomorrow as needed.

Still, VDOT wants locals to “plan now to avoid driving through the day Wednesday and after the storm until conditions have improved.”

Some places have already started announcing closures on Wednesday.

The Reston Animal Hospital and HealthWorks in Herndon will be closed, and the Greater Reston Chamber of Commerce canceled its events for tomorrow.

If you live in Herndon, don’t put out your recycling tonight. Mayor Lisa Markel posted on Facebook that recycling will be collected on Thursday instead.

Info from @TownOfHerndon: Prior to snow, please move cars off of roads so the snow plows can get through. Recyclables will NOT be picked up Wed, but picked up town-wide on Thu. Trash normally collected on Thurs will be collected on Fri. Updates here: https://t.co/azHcy0RddT pic.twitter.com/CzEGc0sZiy

Whether you stay bundled inside or venture outdoors, stay safe and send Reston Now any pictures that you snap of the snow to [email protected] or tag us (@restonnow) on social media. 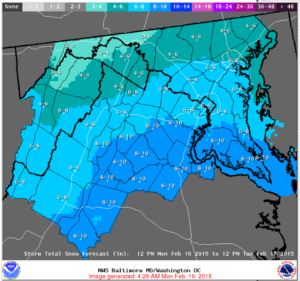 Snow began falling in Reston about 3:30 p.m. A total of 4 to 8 inches is expected to fall between Monday afternoon and mid-day Tuesday and the region remains under a Winter Storm Warning until noon on Tuesday.

Virginia Gov. Terry McAuliffe has issued a State of Emergency for the entire commonwealth.

The Virginia Department of Transportation (VDOT) is prepared for the snow with nearly 12,000 pieces of equipment, including plows, trucks and motor graders ready for snow removal operations. You can visit VDOTPLOWS.org to see the plowing status of the streets near you.

Reston Now will update this story with any school delays or road closures.

(Original Story, Sunday 8 p.m.) The National Weather Service has changed the Winter Storm Watch for Reston and the rest of the D.C. area to a Winter Storm Warning.

The Winter Storm Warning will be in effect from 4 pm Monday to noon Tuesday. A Wind Chill Advisory remains in effect until 10 am Monday.

The NWS says to expect:

A Winter Storm Warning for heavy snow means severe winter weather conditions are expected or occurring. Significant amounts of snow are forecast that will make travel dangerous. Only Travel in an emergency. If you must travel, keep an extra flashlight. Food, and water in your vehicle in case of an emergency.

A Wind Chill Advisory means that very cold air and strong winds will combine to generate low wind chills. This will result in frost bite and lead to hypothermia if precautions are not taken. If you must venture outdoors, make sure you wear a hat and gloves.

(Updated at 6:55 p.m.) Reston and the rest of the D.C. region are under a Winter Storm Warning starting at midnight tonight (Sunday).

Forecasters say 6-10 inches of snow is possible. Meanwhile, the Office of Personnel Management has just announced that federal offices will be closed on Monday.

* ACCUMULATIONS… UP TO ONE TENTH INCH OF ICE… THEN 6 TO 10 INCHES OF SNOW.

* TIMING… RAIN CHANGES TO FREEZING RAIN AND SLEET FROM NORTH TO SOUTH AFTER MIDNIGHT TONIGHT… THEN BECOMES HEAVY SNOW LATE TONIGHT AND CONTINUING THROUGH MONDAY.

* TEMPERATURES… DROPPING FROM THE LOWER 30S AROUND MIDNIGHT TO THE MID 20S LATE TONIGHT… THEN LOWER 20S MONDAY.

* IMPACTS… HAZARDOUS TRAVEL DUE TO ICE AND SNOW OVERNIGHT AND MONDAY. BOTH THE MONDAY MORNING AND AFTERNOON RUSH HOURS WILL BE AFFECTED. POWER OUTAGES ARE POSSIBLE WITH THE COMBINATION OF ICE AND HEAVY SNOW.

THIS WINTER STORM WARNING IS FOR HEAVY SNOW… SLEET… AND FREEZING RAIN AND MEANS SEVERE WINTER WEATHER CONDITIONS ARE EXPECTED. SIGNIFICANT AMOUNTS OF ICE AND SNOW ARE FORECAST THAT WILL MAKE TRAVEL DANGEROUS AND POTENTIALLY CAUSE POWER OUTAGES. ONLY TRAVEL IN AN EMERGENCY. IF YOU MUST TRAVEL… KEEP AN EXTRA FLASHLIGHT… FOOD… AND WATER IN YOUR VEHICLE IN CASE OF AN EMERGENCY. 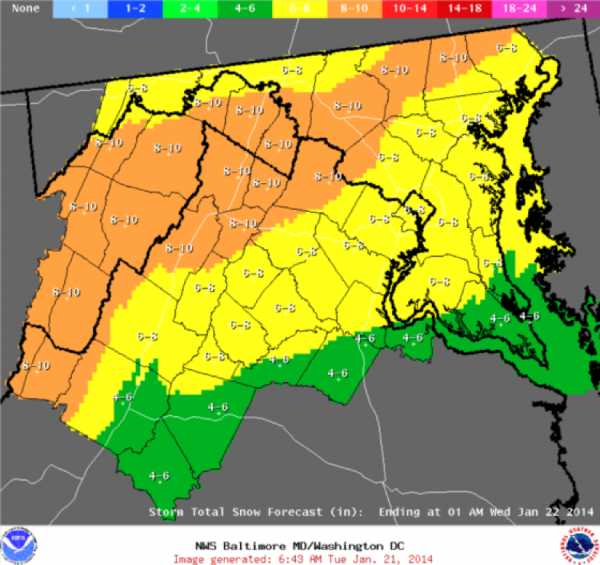 So far, so clear in Reston.

That’s the story at 8 a.m. Tuesday, but it is expected to change quickly. A Winter Storm Warning is in effect for Reston and Northern Virginia. Snow is expected to begin falling in Reston mid-morning, with totals of 6 to 8 inches expected here.

Federal offices in the D.C. area are closed. Non-emergency federal employees will have the day off, unless their office requires them to telework.

Fairfax County government is open, but with unscheduled leave for employees.

Fairfax County Public Schools are closed, along with most other area school systems.

Find out more about Fairfax County agency openings and closing on the county emergency services blog.

The special election for the State Senate Seat in the 33rd District (which covers parts of Oak Hill and Herndon) is on. The county advises voting early if you are headed to the polls. 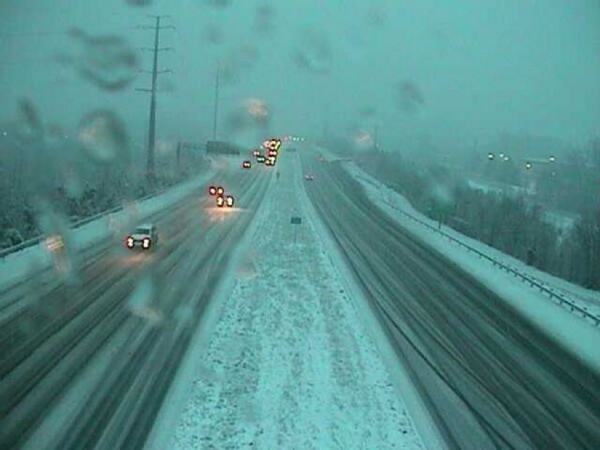 Reston and the rest of the Washington, DC, region are preparing Tuesday for the biggest snow in nearly three years.

Snow began falling in Reston about 6 a.m., right as scheduled by a Winter Storm Warning issued by the National Weather Service. The NWS says 3 to 6 inches may fall between 6 a.m. and noon.

If predictions are on track, it will be the biggest snow since “Carmaggedon,” the Jan. 26, 2011 afternoon rush hour storm that left many motorists around the region stranded in traffic, says NBC4 Meterologist Tom Keirein.

Here are some things to know today:

Fairfax County Public Schools are closed Tuesday for the second day in a row.

Fairfax Parks, Community and Recreation and Community Centers: If you have questions about Park Authority facilities, contact the site directly, call the Parks inclement weather line at 703-324-8661, TTY 711, or visit www.fairfaxcounty.gov/parks. Reston Community Center (both locations) have cancelled programming, but the pool is scheduled to open at 9 a.m.

Fairfax Connector bus service may be affected by the inclement weather. Check the Connector Web page at www.fairfaxconnector.com for the current operating status.

Libraries: Library hours may be affected; call your local branch before visiting. For branch phone numbers, call 703-324-3100 or go to www.fairfaxcounty.gov/library.

Roads: Residents can see the status of plowing in northern Virginia neighborhoods at www.vdotplows.org. Once it snows more than two inches Fairfax residents can enter their address and a color-coded map shows whether plowing is underway, completed, or not yet started in their neighborhood.

Somewhere that you have to be? Read these tips from The Weather Channel on driving on ice.

This story will be updated as developments warrant. Have any great weather photos? Tweet us at@RestonNow, post them on our Facebook Page or email to [email protected].