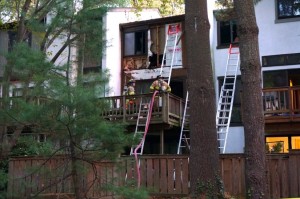 Fairfax County Fire and Rescue says that improperly discarded smoking materials were the cause of a fire Tuesday afternoon on Generation Court in Reston.

The fire caused an estimated $75,000 in damages, officials said.

Firefighters were called to the townhouse at 11686 Generation Ct. about 5:20 p.m.

Smoke and fire were seen in the rear of the three-story, middle-unit townhouse, fire officials said. The fire was contained to one house with no fire extension to adjoining townhouses.

No one was home when the fire broke out and there were no injuries. Two adults have been displaced, fire officials said.

More Stories
County Employees: ‘Community Support for Strengthening Our Libraries, Not Cutting’Reston Real Estate: Should You Buy a Fixer Upper?