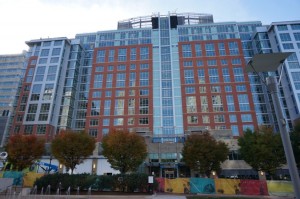 Coming in 2014: Barcelona Wine Bar and Restaurant and Bartaco.

Barcelona, which has several East Coast locations, including one at Logan Circle in D.C., is known for Spanish food and a long wine list — featuring, of course, lots of Spanish wine.

Bartaco has four Connecticut locations and is known for craft margaritas and interesting twists on upscale Mexican foods (sesame rib eye tacos and a flight of tequila, anyone?)

With the new spots, the retail portion of The Avant is fully leased, said Boston Properties Senior Project Manager Rich Ellis. Earlier this year, CVS and World of Beer both signed leases for The Avant.

“The retail at The Avant will be a great amenity to the Town Center as a whole,” said Ellis.

The Avant has begun pre-leasing and the building is expected to open later in November.

More Stories
Friday Morning RundownWatch This Space: What Should Go in Champps Spot?