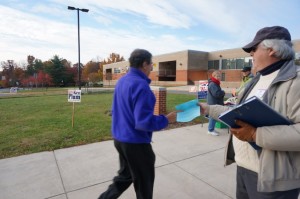 But it was the race for governor that drew many voters out to vote, they said. Turnout was about average for a non-Presidential year, poll workers said. As of 8:45 a.m., South Lakes High School had 479 voters. Reston Community Center Hunters Woods had 397 by 9 a.m., about 10 percent of the precinct. Voters at various polling spots reported little to no waiting.

At RCC Hunters Woods, there were a variety of opinions on the candidates.

“I voted for Terry McAuliffe, Ralph Northam and Mark Herring,” said David Burns of Reston, who says he usually votes the Democratic ticket.

Ellen Graves, a longtime Restonian who is active in many civic causes, including the Reston Association Board of Directors, had more to say on supporting the Democratic candidate.

“I want a governor who is not in my bedroom,” she said. “[McAullife] appreciates and recognizes women. He has a business background and understands what people are going through economically.”

“I think he has a lot of integrity,” said Schwarzman. “I like what he has done for Virginia [as attorney general]. He was one of the first  to go after Obamacare, which I don’t like.

Ron Weber, a retired civil engineer who has worked at the city, state and federal level, said he is disappointed in both McAullife and Cuccinelli and was casting his vote for Libertarian candidate Robert Sarvis.

“McAuliffe is just a bull[expletive],” he said. ” “Cuccinelli is too far to the right. I think a lot of people feel that way. I wish [Lieutenant Governor Bill] Bolling would have run. He was the right man.”

Polls will be open until 7 p.m. Check Reston Now on Wednesday to see how Reston voted.