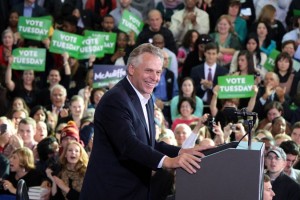 Cuccinelli led McAuliffe as returns started coming in when the polls closed at 7 p.m.. However, after votes from Fairfax — which helped Virginia elect President Obama in 2008 and 2012 — were counted around 10 p.m. McAuliffe was projected the winner with 47.4 percent of the vote to Cuccinelli’s 46. Independent Robert Sarvis earned 6.6 percent of the vote, according to the Virginia Board of Elections. Cuccinelli conceded the race about 10:30 p.m.

In Fairfax, McAuliffe earned 58 percent of the votes, Cuccinelli, 36 percent and Sarvis, 5 percent.

Democrat Ralph Northam easily defeated E.W. Jackson (R) for Lt. Governor, but the race for Attorney General was too close to call as of 11 p.m. Tuesday. Republican Mark Obenshain was leading Mark Herring (D) by less than a point. (50.2 to 49.5).

Longtime Virginia Del. Ken Plum of Reston ran uncontested and was re-elected to represent the 36th District in the Virginia House. Plum, who served from 1978-80 and constantly since 1982, is the longest-serving current Virginia delegate.

For complete results, visit the Virginia Board of Elections website.