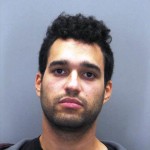 Fairfax County Police have arrested a Reston man in connection with a series of burglaries in Reston dating back to last spring.

All the burglaries took place in neighborhoods off of North Shore Drive, but Caldwell did not elaborate on exact addresses or date.

Stanley lives nearby on Inlet Court.

The burglaries took place during daytime hours between the months of June and November 2013.

Detectives tracked the suspect based on tips they received regarding a piece of stolen property traced back to the Reston area, Caldwell said.