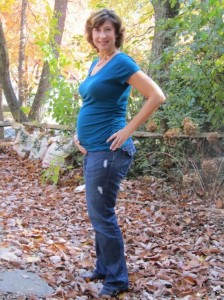 Reston’s Susan Fuller is days away from delivering a baby. Her pregnancy, like her previous ones, has been an easy ride. She will likely go to kickboxing class as usual this week, work on homeschooling her teenagers and get ready for the big day.

She will also say goodbye to the infant and hand him off to his parents.

Fuller, 45, is a gestational surrogate. The baby she is carrying is not her own. He belongs to a couple in Richmond who could not carry to term and who already had one child with a surrogate. Fuller, to whom they were introduced through a friend, was happy to help them out.

“I have felt from the very beginning, when I had my hands full with kids ages 5, 3 and 2, that I had no desire to bring a baby home,” Fuller said. “I do it for the parents.”

Fuller is part of a growing trend. Nationwide, the number of births by gestational surrogates rose by 122 percent  (from 530 to 1,179) between 2004 and 2011, according to the American Society for Reproductive Medicine

This is Fuller’s 10th pregnancy. First, she gave birth to her own three children (now 16, 14 and 13). She “enjoyed every minute” of being pregnant, so she heavily researched surrogacy and contacted an agency specializing in matching couples and surrogates.

Since 2002, Fuller has given birth to two sets of twins and four singletons. Neither a disappointing first experience nor a later stillbirth due to a chromosomal abnormality has turned her away from the experience.

The first birth — a difficult twin delivery at 39 weeks — was made tougher because, Fuller says, the couple was not clear about what kind of relationship they wanted with her.

“I knew this was a lifelong relationship,” she said. “They did not view it that way at all.”

Since then, Fuller has been very upfront about what she expects to get out of the arrangement.

“I want a connection with the parents, not with the baby,” she says.  All of the families were local at the time of the pregnancies.

“It is super fun to see them grow up, to see their pictures on Facebook,” she said.

Fuller, a former nonprofit executive and industrial designer who currently teaches water fitness at the YMCA Fairfax County Reston, is compensated but prefers not to talk about how much she is paid. Most surrogates are paid upwards of $25,000, plus medical expenses, surrogacy agencies report.

Fuller’s pregnancies have affected the whole family somewhat, says her husband, Doug. But he weighs that with what they have gotten in return. The money has helped them put aside college funds for their own kids. And along the way they have met some nice families, he said. Meanwhile, the Fuller children have grown up with their mom being a surrogate.

“For the most part, everyone has been great.” said Doug Fuller. “We did this as a family, and that is something that has made us unique.”

Fuller says her advice to someone thinking of becoming a surrogate: Think hard about what is right for you and what you want to get out of it.

“Keep in mind your needs and the parents’ needs,” she said. “You can be true to yourself but also create the best experience for these people.”