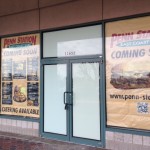 The shop will take over the spot formerly occupied by Philadelphia Mike’s at 11652 Plaza America.

The store is part of a national franchise. Owner Anna Vermillion also operates Penn Stations in Fairfax and Haymarket.  There are more than 250 stores nationwide.

Penn Station is known for its Philly cheesesteaks, hand-cut fries and fresh lemonade.

The Reston location is expected open by the end of the year.