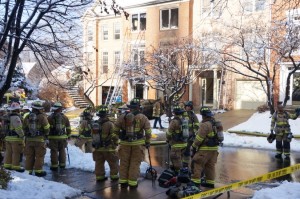 Fairfax County Fire and Rescue investigators say a candle that was accidentally knocked over in the garage sparked a townhouse fire at 11410 Summer House Ct. on Tuesday.

Units were called to the fire about 1:25 p.m. and found heavy smoke and fire coming from the garage and first floor living area of the three-story, middle unit townhouse.

Firefighters conducted an aggressive fire attack and brought the fire under control in approximately 15 minutes, a fire rescue spokesman said. Firefighters kept the fire in check  and it did not  extend to adjacent units.

An adult and two children were home when the fire broke out. They escaped unharmed. The occupants have been displaced. Red Cross support was offered but declined .

Smoke alarms did activate inside the home. There were no injuries.