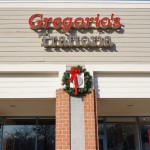 There is a new restaurant at North Point Village Center.

Actually, it is an old spot with a new name. Mamma Lucia, at 1429 North Point Village Center, is now Gregorio’s Trattoria.

The restaurant announced it September it would make the switch, but the new signage only recently was installed.

Management says this location of Mamma Lucia has been locally owned for four years and in not affiliated with other Mama Lucias in the area. Owner Greg Kahn recently opened an additional Gregorio’s Trattoria in Potomac, so the Reston spot will be part of the new brand.