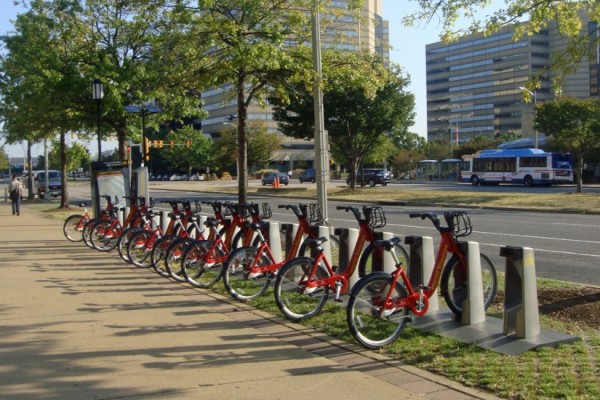 The move to have a bikeshare system in Reston — the first such system in Fairfax County — got underway Wednesday with a meeting of principals who would like to see a network here.

The meeting was the beginning of a feasibility study for a Reston bikeshare program. Last spring, Fairfax County applied for study funds from Metropolitan Washington Council of Governments (MWCOG) Transportation/Land Use Connections (TLC) Technical Assistance Program.

The grant, which Wright says was under $100,000, will look at creative ways bikesharing can work in Reston, he said.

In its grant application, the county said Reston would be an ideal test case for a Fairfax County bikeshare:

“Reston area has the highest concentration of active bicyclists in the County, there is an emerging bike culture forming.  Reston embraced our first two road-diet projects which included bike lanes, and there is strong corporate and residential support to initiate bike sharing in Reston. Furthermore, the findings developed from conducting this study can assist other areas of the region in making sound decisions regarding bike sharing.”

Wright said even though Reston is already connected on more than 55 miles of bike paths, there still would be some challenges to a bikeshare program. It would take different logistics than Arlington, which now has a bikeshare that can easily connected to D.C.’s Capital Bikeshare.

“Reston is really an island,” said Wright. “It is not connected to downtown and Arlington. It is going to take different logistics,”

Wright says he envisions a bikeshare working here with stations at the Metro Silver Line stations at Wiehle Avenue and Reston Parkway, at Reston Town Center and the village centers. Also necessary, to get major employers such as Oracle, United States Geological Survey and others on board to incentive employees using bikeshare in Reston, he said.

The involvement of developers as Reston expands commercially and residentially is also key. Wright said Republic Land Development, which has been awarded the redevelopment of Crescent Apartments and the Lake Anne area, has offered recreational proffers for two bikeshare stations, which would cost $50,000-$70,000 each. Each bike station would house about 20 bikes, said Wright.

“[Bikeshare] is a crucial element in making Reston more transit-oriented and more urban,” says Wright. “If people decided to do it, pretty well situated in Reston to putting in bikeshare and making it easier for everyone.  I think it is key going to be be huge in changing people’s minds about biking.”