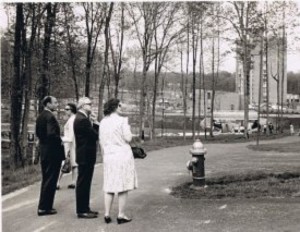 Fifty years ago, the first residents moved into Reston’s new homes. A then-50-year-old Robert E. Simon, who envisioned a “New Town” in the cow pastures near what is now Dulles International Airport, was taking a risk that people would want to live in the undeveloped western part of Fairfax County, with no highway, no grocery store and hardly any other people.

Simon likes to joke he only had to appease 3,000 residents when Reston was founded.

“And that was easy, because they were all cows,” he says.

In 2014, Reston  — now home to close to 60,000 residents  — is now a significant residential and business hub for the Washington, DC, metro area. Reston is the second-largest office market in Fairfax County with almost 19.7 million square feet of space, according to the Greater Reston Chamber of Commerce.

And, with Metrorail’s Silver Line set to open in 2014, more residential and business development is on the way. Long-range major developments planned for Reston:

But before those exponential expansions will happen, Reston will have a series of events commemorating the big anniversary/birthday in 2014.

Sunday, March 23, 4 p.m., South Lakes High School
Reston Chorale presents “Reston’s 50th – A Celebration of the Vision and the Visionary,” a world premiere of All Beautiful and Splendid Things – a choral and orchestra work by composer Donald McCullough  commemorating Robert E. Simon’s 100th
birthday and the 50th anniversary of Reston.

Saturday, April 5, 8 p.m. Reston Community Center
Reston’s 50th Anniversary Celebration.  Enjoy the special screening of “The Reston Story” movie  and the winners of My Community Video Contest. The evening will conclude with champagne and dessert with a toast to Robert E. Simon and each other.