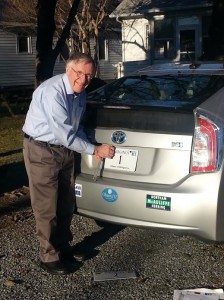 Del. Ken Plum (D-Reston) is officially No. 1 in the Virginia House of Delegates.

License plates for House members are issued in order of seniority of service. Plum was first elected for one term in 1978 and has represented the 36th District continuously since 1982.

Plum is a Democrat in a Republican-controlled House.

“My seniority gets me a license plate that means I have to drive very carefully,” Plum said.