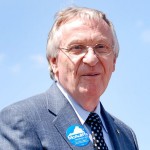 Each year, the Governor of Virginia addresses a joint assembly of the House of Delegates and the State Senate in a speech. It’s not unlike the President’s State of the Union address, except that the Governor provides  a “State of the Commonwealth” as well as his recommendations for legislative action.

Last week, I heard the 35th such speech since I have been a member of the House of Delegates. I think Gov. Terry McAuliffe made the best of any of the speeches I have heard over my career in the legislature.

He emphasized the need for all to work together: “…as we launch this new chapter in our history, let us resolve to show the partisans in Washington and across the nation that here in Virginia, in a Commonwealth that pioneered government by consensus, there is no challenge too great, no debate too intractable and no idea too ambitious that we cannot come together on common ground to build the future our families deserve.” The theme of his inaugural events was “common ground.”

“In today’s modern economy, Virginia has to be smarter, more productive and far more aggressive than our sister states for new jobs and investment,” he said. From the tone of his speech it is obvious that no one will be accusing the new Governor of not being aggressive enough in economic development.

His goals are clear, and he does not duck controversial issues. In his own words, “We should stop over-testing our students…The General Assembly should not wait another year to pass the bipartisan Dream Act…On Saturday I was proud to sign Executive Order Number One, which prohibits discrimination in state government on the basis of sexual orientation and gender identity…An open and welcoming Commonwealth requires a state government that trusts women to make their own health care decisions, and works to expand access to quality care…I am eager to work with the coalition of Virginia leaders who agree that we need to strengthen our democracy by passing legislation putting Virginia on the path toward non-partisan redistricting.”

He was just as direct in his support for an expansion of Medicaid to help those “families (who) are just a major illness or accident away from financial ruin.” As he pointed out, if we fail to exercise the option of federal funding for Medicaid, “we will forgo $2.1 billion annually in federal funding over the next three years. That is more than $5 million per day.”

The Governor has extended an invitation for legislators of both parties to work with him. I look forward to working with him in moving Virginia forward.

To read the full text of the Governor’s speech, go toGovernor’s Address.

Ken Plum represents Reston in Virginia’s General Assembly. He writes weekly on Reston Now. He can be reached at [email protected].