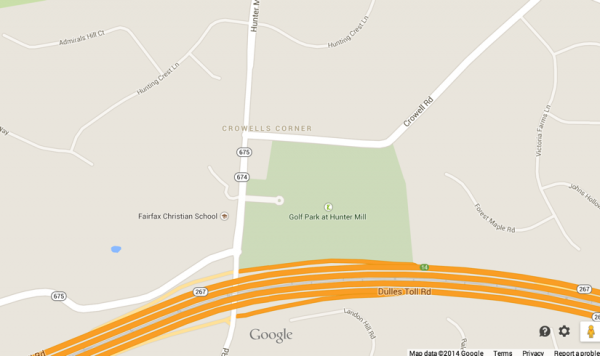 The Fairfax County Board of Supervisors is scheduled to decide Tuesday on a revision to the traffic pattern near the site of a planned girls school off of Hunter Mill Road on the Reston-Vienna border.

Oakcrest School, a 180-student Catholic girls middle and high school, has been planning for years to move from McLean to Hunter Mill and Crowell Roads, where it will build a new facility.

They have been approved for the move for more than four years, about the same amount of time school officials and planners have been going back and forth with neighbors over traffic.

A condition of the earlier approval hinged on two traffic flow conditions negotiated with the community. The school was to locate the campus driveway on Hunter Mill Road  and install a roundabout at the intersection with Crowell Road, which is now controlled by stop signs.

However, Oakcrest was unable to purchase the property it needed to build the roundabout, so it has been unable to proceed with building the campus without it.

In 2013, Oakcrest submitted an alternate proposal that would use a traffic light at the Crowell-Hunter Mill intersection instead, and move the school’s entrance to Crowell Road.

That created a new set of conflicts with Crowell Road-area residents. Some of those residents — along with many students — spoke at a BOS public hearing on the subject last month.

Many residents are concerned about a Crowell Road entrance which has a sharp curve dubbed  “Dead Man’s Curve.”

In July, the Fairfax County Planning Commission voted 6-5-1 for approval of the amended plan.

Parents and students told the supervisors in January that they fear their school will close if this issue goes on much longer — or is denied. Oakcrest’s McLean property has been sold, and the school has spent in the six figures during the dragged-out land use process, parents said.