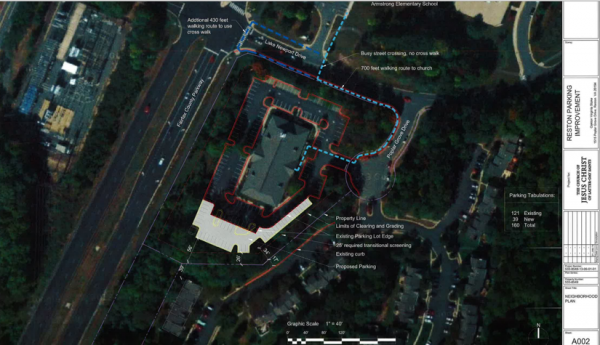 The church is, however, looking to expand the 121-space parking lot at its current location at 1515 Poplar Grove Dr. in North Reston, and some neighbors at Birchfield Woods Cluster are not pleased with the environmental impact.

At a Feb. 18 meeting, Reston Association’s Design Review Board (DRB) — the committee that establishes and reviews Reston’s design standards — voted to allow allow the church to expand the lot.

Birchfield Woods residents are appealing the decision, saying it will result “in a net loss of over 80 trees which serve as a buffer between the church and the Birchfield Woods Cluster.”

“Birchfield Woods and affected parties are appealing the Feb. 18 decision as the approval directly contradicts the Design Review Boards requests in November,” says A.J. Bass, a Birchfield Woods resident. “The revised plan actually increased the number of trees being removed from a proposed 120 to over 140, and reduced the number of trees the church would replant from a proposed 80 down to only 60.  The church also did not submit a traffic study as requested by the DRB.  Several of the DRB members scoffed at the Affected Parties’ comments regarding the wildlife or number of trees that would be taken down and not replaced.  This clearly goes against the their initial decision.”

“It’s disappointing as a resident of Reston to see the Association at odds with itself in action and word,” Bass said.

The new plan calls for planting of replacement trees and shrubs to provide a 25-foot buffer, as well as a relocated storage shed. The church also reduced the number of additional parking spots to 39, for a total of 160 spaces in the new lot.

Last year, the church approached Reston Association about purchasing three parcels of land on which to build a new church. The land — at 2639, 2641 and 2643 Fox Mill Rd. — is undeveloped , wooded common area owned by RA since the late 1960s and mid 1970s.