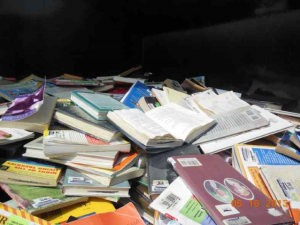 Kathy Kaplan, a longtime Restonian and community activist, will be honored as the Reston Citizen of the Year at 7:30 p.m. Monday at Reston Community Center Hunters Woods.

“Kathy’s award is a demonstration of the power of individual citizens to make a big difference in the community,” said Mills. “We in Reston love our library, and we’re grateful to Kathy for everything she’s done to protect it.”

A published author of poetry and children’s books, Kaplan is an avid user of the Reston Regional Public Library. She brought to light last year that the library system was no longer recirculating books. Instead, they were dumping them.

After Kaplan noticed that the bookshelves were increasingly empty, she began to investigate why.

Through personal outreach and research of obscure Fairfax County documents, she discovered that the county had thrown away more than 100,000 books, and was slated to reduce the library budget and cut the professional librarian staff as part of a departmental strategic plan.

Reston Regional to be part of the library system’s “Beta Plan,” but Kaplan mobilized citizens to protest the cuts.

Working with concerned librarians and mobilizing civic organizations across the county, including the Fairfax County Federation of Citizens Associations, the League of Women Voters, and RCA, Kaplan helped force a review, which ultimately let to the scrapping of the plan by the Library Board of Trustees and the board of  supervisors, said Mills.

The RCA backed a resolution calling for an end to the destruction of library books, abandonment of the plan and a re-thinking of the library strategy, says Mills.

Kaplan researched and co-authored a report for the FCFCA that detailed the library actions and plans. She also worked with Supervisor Linda Smyth, who visited the site where the library books were being dumped and then directed the suspension of any further destruction of books in good repair.

As a result of her efforts and other concerned county citizens,the supervisors directed the library trustees to investigate the book destruction and re-think the library strategy, says RCA.

The RCA Citizen of the Year Award was established in 1976. It honors a citizen whose goals are consistent with the goals of Reston, and of RCA; who has contributed to the quality of life in Reston; and has helped people in need benefit from his or her actions, among other criteria.