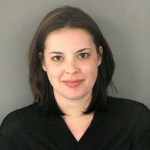 A 26-year-old Reston woman was arrested Saturday night after allegedly showing up naked at the Arlington Magistrate’s Office.

Police say Maura Fussell arrived at the magistrate’s office around 11:00 p.m. seeking to visit her husband, who had been arrested in Clarendon earlier that day.

She was drunk, completely naked and refused to get dressed or leave in a cab, according to Arlington County Police spokesman Dustin Sternbeck.

Sternbeck was unable to say whether Fussell arrived at the office wearing clothes and subsequently removed them, or whether she arrived there naked.

Fussell was arrested and charged with indecent exposure and drunk in public. She was held in jail until sober, police said.