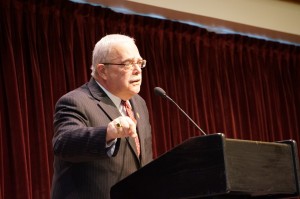 Rep. Gerry Connolly (D-VA 11th) has introduced legislation in the House of Representatives to provide a 3.3 pay raise to federal workers.

“After a three-year wage freeze, wage-reducing work furloughs, sequester cuts, and a government shutdown, our nation’s dedicated federal employees deserve fair compensation,” Connolly says.  “Not only has our federal workforce been demonized and demoralized by the constant attacks from the House majority and the Tea Party, over the last four years federal wages have lagged far behind the private sector and have even failed to keep up with the rate of inflation.”

The FAIR Act recognizes the alarming rate of attrition among federal employees.  Since 2009, the attrition rate in the federal workforce has increased by 35 percent, with more college graduates turning away from a federal career and many federal managers questioning why they should remain in federal service, according to statistics from the non-partisan Partnership for Public Service.

The 1 percent federal wage adjustment granted last year to federal workers still lagged behind the country’s historically low average inflation rate of 1.5 percent for 2013, to say nothing of average private sector wages which rose by 6.5 percent over the last four years, according to the Employment Cost Index.  Nationwide, earnings grew in 2013 in every industry except the civilian federal government, which fell $6.7 billion, according to the U.S. Department of Commerce’s Bureau of Economic Analysis.

“Federal workers deserve to be compensated for the vital role they play in the lives of millions of Americans,” Moran said.  “These are the men and women finding lifesaving cures at NIH, catching criminals, supporting our troops, and protecting the environment. They have bills to pay and families to raise. After three years of a pay freeze and too many furloughs, they’ve earned a modest, decent raise.”

Federal employees have also done more than their fair share toward reducing the federal deficit.  Cummings stated that “they have endured a 3-year pay freeze and $140 billion in pay and benefits cuts.  A 3.3 percent pay increase in 2015 as called for in the FAIR Act would be a modest first step to help us retain and attract the best and brightest to our nation’s federal service.”