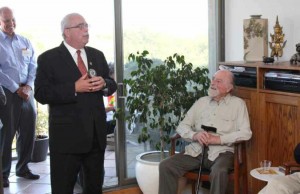 A large group of local dignitaries will be on hand to wish Reston founder Robert E. Simon a happy 100th birthday on Saturday.

Simon will turn 100 on April 10, but the entire community is invited to come to Lake Anne Plaza from 12 to 3 p.m. to celebrate. The ceremony, which will feature speakers, dedications and entertainment from students from Terraset Elementary School and South Lakes High School, begins at noon.

Founders Day 2014 will also mark Reston’s 50th birthday. The ceremony honor Reston citizens who were raised here and are now raising their own families here.