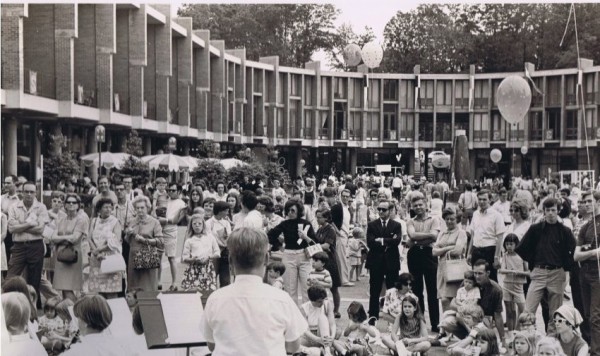 Reston founder Bob Simon’s idea for density and community was forged in a childhood apartment high above New York City’s Riverside Drive and in the green spaces of urban parkland.

Whether the idea was a good one, a not-so-good one, a half-hatched one or a groundbreaking one depends on who you ask.

And many people are asked — or at least answer — in the documentary Another Way of Living: The Story of Reston, VA. The 70-minute film by director Rebekah Wingert-Jabi was shown at a VIP screening Saturday night at Reston Community Center as part of the Founder’s Day celebrations.

Wingert-Jabi, a Peabody Award winner who shot about 250 hours of film for the project, hopes to enter the movie into national film festivals. After that, it will be available for the public.

The movie looks at founder Simon’s life and what inspired him to purchase more than 6,000 acres of Virginia  farmland in 1961 and plan an urban-style “New Town” in an era of neat lawns and tract homes.

It didn’t always go that well.

“The vision was correct, but his timing was terrible,” says former Fairfax County Executive J. Hamilton Lambert, one of many planners, architects and citizens interviewed in the film. “Putting a town in the middle of a field – people didn’t know how to take this field of dreams.”

Indeed, Reston had many ups and downs to get to the place it is today, with 60,000 residents, excellent amenities, and an important business and retail hub. Fifty different banks originally turned down Simon for financing. And in 1967, After Lake Anne and some of Hunters Woods were built, Gulf Oil took over the struggling operation and fired Simon.

“How could they fire him?” longtime Restonian and chair of the Reston Community Center Board Beverly Cosham wonders in her on-camera interview. “He WAS Reston.”

Simon returned to New York, where he would stay for the next 30 years. Gulf, and later Mobil, would finish Reston, but much of the vision was watered down. Ideas for village centers like Lake Anne morphed into garden variety shopping centers and high-density housing in much of the community ended up being single-family housing subdivisions.

But the idea came back together by 1990, when the Dulles Toll Road made Reston more accessible and the opening of the Reston Town Center — another innovative (and to some, skeptical) idea in an era of enclosed shopping malls — helped cement Reston’s sense of place. Simon returned to stay shortly after.

The movie is ripe with archival footage, from old Life magazine articles and photos about Reston, to home movies at Lake Anne Plaza. Much of that came from residents, and it is the story of the residents that is a huge part of Reston’s history.

The movie talks to some of the originals and what drew them here: One felt isolated in a single-family house elsewhere in Virginia; others heard of the inclusive community in an era of segregation and packed up to live here and have a more egalitarian life. They are still here all these years later; the gamble paid off for them personally.

The pioneer spirit (and some trippy 1960s fashions) are at the heart of Another Way. At the brink of the civil rights movement and the women’s movement, Reston was starting from scratch. It could be anything it wanted. So it was.

Want a coffeehouse? Start one. Child care center? Gather some moms. An inclusive church focusing on good deeds for the community? Sure, open a couple. Theatre troupe? Put up a flyer and hold auditions. A commuter bus line to D.C. that features evening cocktails? Go for it.

The film also captures Simon’s personality, which is funny (seriously, several audience giggles) and feisty even on the brink of 100. The filmmakers follow him on his morning walk around Lake Anne, where he answers the question “How are you, Mr. Simon?” with a hearty “I’m healthy! And you?” every time.

As for the future, Simon admits he probably won’t be around to see what happens. Reston is on the brink again, this time as it prepares for Metro’s Silver Line to arrive in 2014 and some major redevelopment of Crescent Apartments, Fairway Apartments and other aging neighborhoods.

Will lower-income residents be priced out of housing? The movie spends too much time following one Crescent resident in a battle for access that really never was much of an issue. Will Metro double the population here and how will Reston handle the change? We may have to wait for the sequel.