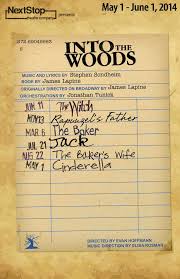 When Herndon’s NextStop Theatre presents its production of Into the Woods May 1 to June 1, Today Show co-host Kathie Lee Gifford will be providing the voice of the Giant’s Wife in the staging of the Stephen Sondheim musical.

“I have known Evan since he was in an early production of Saving Aimee at Signature Theatre back in 2007, So I was happy when he asked me to record the voice of the Giant’s Wife,” Gifford said in a statement. “I love the DC theatre community, I adore Stephen Sondheim, and I am always thrilled to help a friend who is working to achieve his dreams.”

Into the Woods combines the iconic stories of Little Red Riding Hood, Cinderella, Rapunzel and Jack (the giant killer), plus the new tale of a childless baker and wife.

Their intertwining quests into the woods result in a twistedly funny, but sobering musical about the cost and consequences of “happily ever after,” says NextStop. The original Broadway production earned three Tony Awards and a Grammy. It also inspired an upcoming Hollywood movie starring Meryl Streep, Johnny Depp, and Anna Kendrick.

NextStop was formerly known as the Elden Street Players. It changed its name last year after hiring Hoffmann, a 2000 graduate of Herndon High School and who has worked extensively in Washington-area theater. Hoffmann says Gifford’s addition to the production is a significant achievement for the theater company.

Visit NextStop’s website for show times and to purchase tickets.