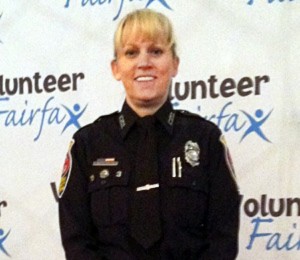 Several Restonians were honored for their service to Fairfax County at the annual Volunteer Fairfax Awards on Friday.

Among the 2014 Service Award Winners:

Volunteering since 2004, she has taken on a variety of administrative duties. Among them: streamlining the countywide auxiliary police records system and facilitating a monthly auxiliary police meeting, providing  support to patrol officers on the street.

FCPD says Soloff’s dedication was tested when a drunk driver struck the cruiser she and another officer occupied while driving a patrol shift.

“APO Soloff remained calm and professional as she assisted the patrol officer in arresting the driver for hit and run drunk driving,” Lt, James Krause said in Soloff’s nomination. “This continuous level of commitment has provided leadership and positive examples many fellow APOs look up to and aspire toward.”

Nicholas Hartigan started the Reston Young Professionals, an organization that provides opportunities for community service, networking, and leadership to young people living in and around Reston.

Through his role with the Reston Young Professionals, he has coordinated groups of volunteers looking for a opportunities to give back to the community. RYP has helped with a variety of events in the Reston community including cleanup days, backpack and coat drives.

Hartigan  “is consistently encouraging members to suggest and lead volunteer events, instilling his passion for volunteerism in others,” Volunteer Fairfax said,

Reston’s Lynn Lilienthal, a board member of the Reston Historic Trust, calls Hartigan “one of the new pioneers and leaders of Reston.”

“I believe that Nicholas has all the right instincts for being a part of this community and assisting other to join in as well,” she said. “Accepting responsibility, becoming part of the fabric of the community through work in our social organizations is fabulous to see in others.”

Amy’s Amigo is a nonprofit founded five years ago by now-South Lakes High School seniors Kacey Hirshfeld, Hannah Becker and Olivia Wolfe. The girls wanted to give back in memory of their friend Amy Boyle, a Hunters Wood Elementary classmate who died of brain cancer.

One of the group’s main fundraisers has been the Be Amyazing Youth Triathlon, which will hold its fourth annual race May 11.

Proceeds from the popular Reston event are donated to the Childhood Brain Tumor Foundation.