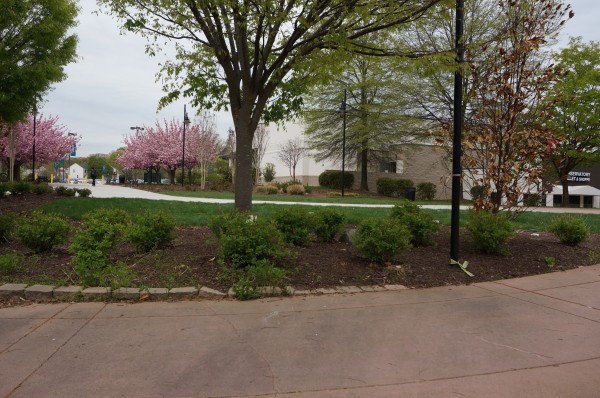 If you see something, say something.

Those organizations have been meeting with Hunters Woods businesses since last summer in an effort to make the neighborhood safer — or at least more appealing. On Wednesday, they met with citizens to hear their concerns and communicate plans to make the village center safer.

“What we found when we began addressing issues is it is a lot about perception,” said Katy DeFoe, crime prevention specialist for Fairfax County Police’s Reston District Station. “What we heard was a lot of things are happening, but there are not a lot of calls for service.

“We will come if you call us,” she told the citizens at a forum at Reston Community Center Hunters Woods on Wednesday. “Call the police non emergency number (703-691-2131). What should you report? Anything out of the ordinary. A group of people standing outside store? Call us. If someone approached you and asked for money, call us we will check it out. Think someone stole something? Call us.”

Fairfax County Police stats show that in the last 12 months, 36,114 major crimes have been reported countywide. In area 530, where Hunters Woods is located, there have been 129.

At Hunters Woods Village Center itself, 45 larcenies, four robberies, eight assaults and three drug violations were reported, DeFoe said. There are also dozens of “nuisance crimes” such as public intoxication, panhandling, and public urination, she said.

Police said they will be increasing their presence this spring with bike patrols and extra patrols on the Reston Association paths near the plaza. Safeway and Edens, the owner of the shopping center, will also maintain a “no trespassing” list of people who have caused trouble. RA is planning to install extra lighting on the paths by the end of the summer, says Larry Butler, Parks and Recreation Director.

“We know there is an issue, said Ken Bain, assistant commander of the Reston District Station.  “We were hammered here last summer. We won’t let that happen again this summer. We have a commitment to this area. We are not going to let it decline any further.”

One Fellowship House resident said she witnessed a drug arrest on the plaza Wednesday morning.

“Four police cars were here,” she said. “The one person you did not get — the leader, the mule — was sitting in the lobby [of RCC] when we came in. They live in the trees over there. We have to get to Safeway somehow. When you have an entire building of senior citizens who do not have the strength to fight back, we are concerned how we are going to get around.”

DeFoe said the person committing the crime was charged and taken to jail. The others nearby were not committing a crime, she said.

“Truly, one person was causing a problem,” she said. “The other individuals were not doing anything of a similar nature. … Just because they were hanging out in the woods, they were not committing a crime.”

Another Fellowship House resident said she was concerned about the homeless allowed to camp out on the grounds of the Christ the Servant Lutheran Church on the plaza.

“Can they sleep inside?” the resident asked. “There would be less issues.”

DeFoe said the crimes are generally not committed by the homeless people. Carl said the three men who live in tents behind the church have lived on church property for more than a year without an issue. They were sleeping in the HVAC enclosure until about five weeks ago, when county fire officials said that was a hazard.

“Our goals for these three individuals is … to get them into homes,” Carl said. “If any are causing a threat to anyone we need to deal with that appropriately.”

There will be an additional community forum at 2 p.m. Saturday at Christ the Servant Church, 2320 Hunters Woods Plaza.