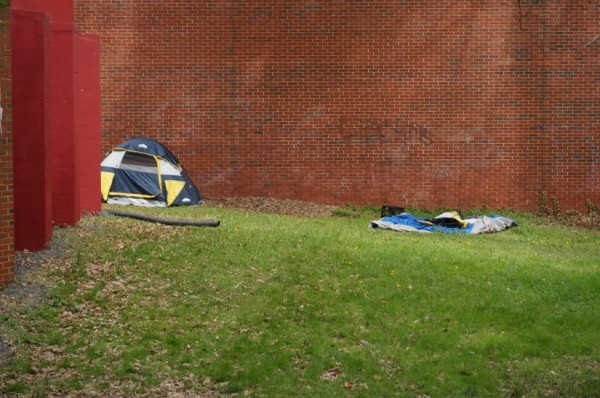 Hunters Woods Village Center management rearranged the parking lot and gave the shopping plaza a cosmetic facelift about a year ago. But a deeper problem remains: the perception that the center is not a safe place.

There have been recent complaints of panhandling and other nuisance, but not necessarily criminal, activity at Hunters Woods, Fairfax County Police said. This spring, residents of the Hunters Woods Condo Association, which borders the plaza’s Christ the Servant Lutheran Church, say they have noticed a new neighbor — one who lives in a tent in back of the church.

The tent was a subject of a recent condo association meeting. It is sure to come up again on May 7 and 10, when police and representatives from Reston Community Center, Cornerstones and FCPD will meet with the community to talk about what’s being done to improve safety at Hunters Woods.

Katy DeFoe, crime prevention specialist for FCPD’s Reston District Station, say community leaders have been meeting for about a year to discuss — and make changes at — Hunters Woods.

“I hear from the community ‘I don’t want to go to Hunters Woods. There are people hanging out there,’ ” says DeFoe. “But the stories I hear are not backed up by [crime in the] police reports.”

The police did not have updated crime stats for Hunters Woods available.

DeFoe says several plans have been implemented to work on improving safety (or the perception of safety) at Hunters Woods.

As for the tent dwellers and other disadvantaged people who frequent the plaza, authorities say they know who they are and are working with them on housing and other services.

Both DeFoe and Greg White, COO of Cornerstones, the Reston nonprofit that helps residents in need of services, say crime at Hunters Woods is not usually attributed to people who are homeless. White says he has identified one man who was aggressively panhandling.

White says there have been a handful of people living in tents in the area for years. They are usually found in the wooded areas near the Reston District Station and by Target. The county allows this, as long as they do not bother citizens.

“There are certain parts of the population who don’t do well in shelters,” says White.

This is most often due to substance abuse issues, mental health issues or difficulty following the shelter’s rules.

Christ the Redeemer has an active outreach for people who are homeless, said White. The church’s pastor, Philip Carl, was traveling this week and could not be reached.

On Tuesdays, about 15-20 people usually come to the lunch and outreach sponsored by Cornerstones and the church, said White.

The man who is living behind the church used to camp in a different location in Reston, said White. He works odd jobs for the church and Cornerstones is working on getting him more permanent housing, he added. DeFoe says there is no ordinance that prohibits camping on private property and that the church is not under the management of Edens, the company that owns the retail portion of Hunters Woods.

Leila Gordon, executive director of Reston Community Center, said she welcomes everyone in the building — as long as they comport themselves respectfully. That applies to people who are homeless who wish to use RCC Hunters Woods’ locker rooms to shower or just sit in the public space to get out of the cold, she said.

“It is a covenant,” she said. “When you come into our facility, your treat yourself and others with respect. It is a two-way street.”

Gordon says the Hunters Woods working group has helped the organizations better understand the dynamics of the neighborhood.

“There is crime in this area,” says Gordon. “But the homeless are also the victims. They are not the perpetrators. That doesn’t mean we allow behavior that rattles other people. We have made it clear that foul language and public drinking won’t be tolerated.”

Interested in attending the public meetings on this subject? They are May 7, 6:30 p.m. Reston Community Center Hunters Woods and May 10, 2 p.m., Christ the Servant Lutheran Church.

Photo: Tent in back of Christ the Servant Lutheran Church.