Fairfax County Public Schools will drastically overhaul its structure, according to an internal memo sent to staff members from Superintendent Karen Garza.

Effective July 1, FCPS will no longer have eight clusters. Instead, it will have five regions, each with about 36,000 students.

In the Reston area, South Lakes High School and Herndon High School pyramids will be in Region 1 with Langley, Madison and Oakton High Schools. One regional superintendent and one executive principal will oversee 40 schools.

The new structure also reduces the number of assistant superintendents to five from eight and adds an executive principal for school improvement in two of the regions (regions 2 and 3). FCPS will also eliminate staff that concentrated on professional learning and accountability.

Garza did not elaborate whether administrators would lose their jobs under the new structure. 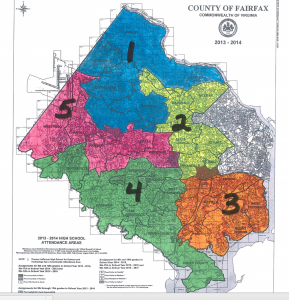 “The future of FCPS is up to us and it begins with how we design ourselves to move our important work forward,” Garza said in the memo. “Today, I am pleased to share with you our new organizational structure. After one year of evaluating our current situation, we have developed a new structure that I know will serve to better align our systems, improve our decision making and facilitate stronger and more differentiated support of our schools.”

Garza said FCPS took into account conversations with administrators, surveys and looking at other school systems of a similar size since she took office nine months ago. FCPS is one of the largest school systems in the country with more than 180,000 students.

The superintendent said the new structure will create “significant” budgetary savings. FCPS received less than the $98 million requested from the Fairfax County Board of Supervisors for Fiscal Year 2105, but FCPS will also receive additional money from the state.

Garza warned in January there may need to be more than 700 layoffs, some by attrition, if the system’s monetary needs were not met.

“All of this information was used to shape our new organizational structure,” Garza said. “There were a number of reasons for considering a new organizational structure primarily to help us to be more effective and responsive to our schools. I am pleased to report that this new design is also cost effective and will create significant budgetary savings, once fully implemented.”

Garza said in the memo that “this is an administrative change and will not affect teachers and most other employees throughout this organization.”