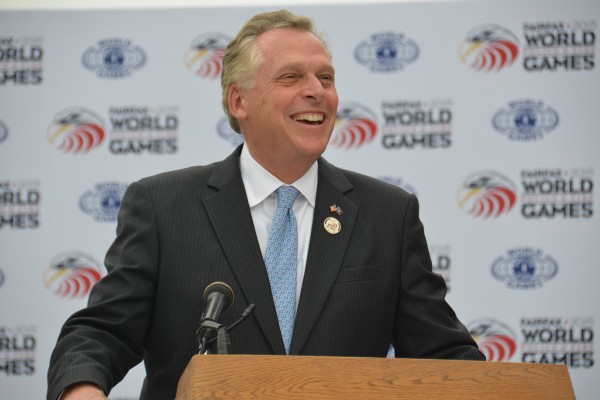 Local officials and Virginia’s governor gathered in Vienna Wednesday to kick off the countdown to the 2015 World Police and Fire Games.

The games, which will bring more than 12,000 athletes/public safety officers to Fairfax County beginning June 26 of next year, are expected to be an economic boom for the county as well.

While events will take place all over the county, Reston will play a key role in the games. The Hyatt Regency Reston will serve as the Athletes’ Village for the competition for the 10-day event, says Fairfax 2015 CEO Bill Knight.

Fairfax 2015, the organizing committee for the biennial games, announced at a news conference Wednesday the establishment of an Honorary Board, as well as new funding commitments of $5 million from public and private sources.

Fairfax County tourism officials project that games’ visitors and activities will bring $60 to $80 million into the county.

It will cost $20 million to put on the event, Fairfax 2015 says. The group has received corporate sponsorship commitments, and McAuliffe said he has requested funding in this fiscal year budget. Corporate sponsors who have committed over $2 million so far: Keolis, Pierce, SAIC, Scott Safety, Cardinal Bank, Cordia Partners, and Venable law firm.

“I am excited to serve as Chairman of these Fairfax 2015 Olympic-style games and to help support and honor the first responders and public safety heroes who have given of their service and sometimes their lives to protect us,” McAuliffe said at the news conference at Fairfax County Fire Station 42 near Wolf Trap National Park, where the closing ceremonies will take place next July.

Opening ceremonies will take place at RFK Stadium in Washington, D.C. and sporting events will happen at 53 locations in the county. Exact venues will be announced soon, officials said.

Earlier this year, Knight said Reston may be home to weightlifting and Honor Guard competitions, as well as a dodgeball competition, a cycling event and the open water swim.

Knight has executive experience with the Summer Olympics in Atlanta, World Cup USA and other major events. He said on Wednesday that the group is “making great progress in the planning and coordination of the Games which are 400 days from today.”

“The days will fly-by, so it is critical that individual citizens and business leaders step-up today, embrace the World Police and Fire Games and help accelerate the momentum we are currently enjoying,” Knight said.