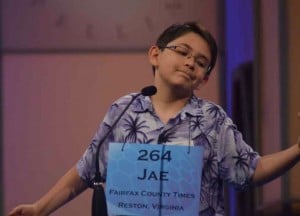 Hunters Woods Elementary School sixth grader Jae Canetti will be making his third appearance at the Scripps National Spelling Bee Wednesday at the Gaylord Resort and Conference Center in Maryland.

Jae, who earned the trip to the national bee by winning the Fairfax County Bee, was ousted in the 2013 semifinals after he tripped up on the word “grundriss,” a word of German origin defined as a comprehensive outline of a science.

In 2012, as a fourth grader, Jae also made it to the semifinal round, tying for 22nd place. He was the youngest speller in the bee that year.

Jae is one of 13 three-time contestants at this year’s national bee, which will feature 281 spellers. Preliminary rounds begin at 8 a.m. Wednesday and will be broadcast on ESPN3.  The semifinals and finals are on Thursday, also on ESPN3.

When not practicing bee-worthy words, Jae is a huge baseball fan. The 12-year-old plays Little League and travels with this father to see minor league baseball games. He has also participated in the gifted programs at the Davidson Institute Young Scholar program and the Johns Hopkins University’s Center for Talented Youth.

Jae is one of 14 contestants from Virginia in the national bee.

Reston Now will keep you updated on Jae’s results at the Scripps National Spelling Bee.